Each morning everyone would go out birding in their own time meeting up at 8.00 for breakfast before going out for the days birding.
The first morning I went from the Elan Valley Hotel downstream towards Rhayader to the iron bridge where we had seen dipper on our previous visit. On the way I was treated to the continuous singing of willow and garden warbler, blackcap and chiffchaff as well as at least 6 groups of goldcrests. Song thrush were also constantly calling. The footpath spends a lot of time under what is effectively a tunnel of trees and a few hundred yards from the hotel I found a buzzard roosting only 20 feet in front and above me. I stopped and looked at it looking at me (too dark for a picture) but in the end it decided to move, however it could only fly along the tunnel. 100yards further along I found it again and the episode was repeated. This happened 4 times in all until it finally came to a gap in the trees and disappeared over the fields. At the iron bridge there was a drake mandarin duck(!!), pied and grey wagtail and eventually a dipper which came from upstream and flew up the side stream. I waited hoping it would return and land on one of the mid stream boulders but it didn’t. It or its mate did fly out of the side stream but disappeared downstream in the direction of Rhayader.
I met the others at breakfast who had had an even better morning than I. They had gone upstream of the hotel and back along the opposite bank. They had added goosander to the list and had found a dipper nest! Steve had also found a spotted flycatcher and a redstart in the hotel garden, the latter, we later determined, was actually nesting in an old ventilation duct of the hotel.
The rest of my pre-breakfast sessions  were really spent trying to get dipper pictures either at the nest place or in the shallows where they fed.
We also found dippers in the Gilfach reserve,  in the river just before you enter the Gilfach reserve and near the Halt Cafe (on the A44 just before you reach Rhayader). Finding them proved relatively easy with a bit of effort but getting a decent picture was entirely a different matter.
At the nest site in the Elan Valley they were on show under the far bank/overhanging trees every time I went there and would then disappear off to feed. Since the birds were not feeding young the brooding swap only occurred once every hour or so, so a lot of the time was spent waiting in hope and feeding the midges.
The same was true at Gilfach where you only saw the birds as they came to and from the nest to swap over.
In an afternoon session Alan and myself did find both Elan valley birds feeding in the shallows:

We also found a feeding bird on the Gilfach stream as we walked the nature trail from near the reserve entrance to the Otter Hide but this latter find was ruined by a loud mouthed pillock who could see what we were trying to photograph but insisted on coming up anyway and talking very loudly to Alan about how he didn’t want pictures of the dipper on the wooden sheep fenmce on which it was standing. He clearly didn’t want us to get pictures either.

This was the second time this pea brain ruined our day – the first being when we tried to get redstart pictures at the Gilfach visitor centre (more about that in a later post).
Finally, during my penultimate pre-breakfast session, my luck finally changed and one of the Elan birds landed directly opposite where I was sitting then had a wing flap and a twitter as it called to its mate. They both then disappeared up to the shallows. The shots were at the extreme range for my 400mm f5.6 but they were by far the best shots I managed. 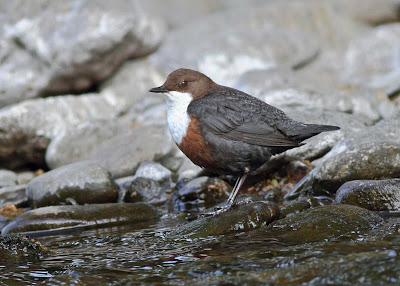 Posted by Greater Kent Birder at 23:35