A Tour of the Recording Area

Sorry about the lack of activity over the last couple of weeks but the reality has been that I’ve had nothing much to report – in part due to the weather and in part due to the dearth of birds in East Kent.
After a few days stuck inside due to the weather today (Wednesday 14th) promised sun so I decided to go for the big one – a walk from Newdowns Farm to Backsand , then along the river bank to the point and back to the car along the beach and across Princes.
The day started well with a grey partridge feeding close to the Ancient Highway as I drove to Newdowns.
The walk from the poly tunnels to Backsand revealed the normal summer residents – sedge and reed warblers, a few whitethroat, a lone blackcap, and a few skylark and mippit but it was good for hares – there were 3 in the first field (alongside Newdowns reservoir) and another 3 in the last field before you turn back on yourself to get to Backsand itself. In the same field was a red legged partridge.
The water levels on the scrape are very high after the rain so there were no waders at all, just a few ducks – mallard (25) and tufties (9) mainly plus a couple of grey lags and shellduck and a little egret. If the weather carries on as it has (ie raining) then Backsand may have to be pumped out for the wader migration. On the warbler front I only had singles of sedge, reed and Cetti’s warbler and a lone whitethroat
After Backsand I went up on the river bank and walked to the point. The bank-side scrub held a good head of whitethroat (16 singing males) and lesser whitethroats (6 singers) but the numbers of other warblers were very low. I did try several times to photograph a lesser but they would have none of it. A juvenile whitethroat was much more obliging:
On the salt marsh I had a couple of little egrets and a grey heron but no waders other than 6 curlew and a few oyster catchers. Up near the point  38 seals were sun bathing.
On the Shellness Nature Reserve (or 100 acre field if you prefer) there was very little other than skylarks, linnets and mippits (8 to 10 of each). The highlight was a pair of stonechats and I found a lone corn bunting. The beachside sea buckthorn produced even less – it was more or less lifeless.
Throughout the walk the shortage of  reed bunting was really apparent – I only noted 8 for the whole walk and I didn’t see a single raptor. Orchid numbers were very good though (Marsh orchids on the 100 acre field and pyramidal on the beach track) with most now coming into flower.
After a coffee in the Obs I stopped off at Dickson’s corner because a hobby was in residence. It was joined by a second for a short period but the second bird didn’t linger. I did on several occasions manage to get pretty close to the bird perched on a fence post but always when I was shooting more or less into the sun.
I was making my way back to the car and standing on the road when the bird flew along the track and landed on a post quite close by but low(ish)shutter speed/poor panning technique ensured the pictures were not very sharp. Still it was a nice way to end the session. 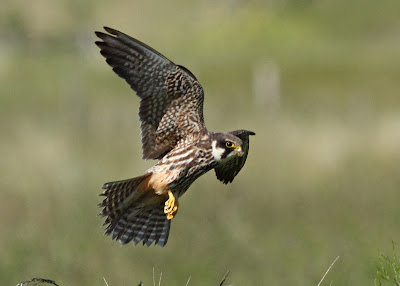 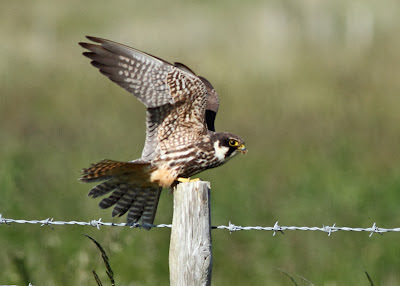 Posted by Greater Kent Birder at 23:52