The last few days I have been on a tour of the northern most regions of the Greater Kent recording area – popularly known to others as Scotland.
On Thursday, possibly one of the wettest days in living memory, we drove from Kingsdown to Perth (Scotland) and it rained big time the whole of the way. Things couldn’t have started much worse with it taking nearly 3 hours to reach the M1 despite us leaving the centre of the universe at 5.15; the traffic improved after that even if the weather didn’t.
Nominally we were going to Scotland to see a great nephew but in reality it was to give me a chance for some birding in the north – weather permitting.
On the Friday Angie spent the day with the little fellow but I spent the day at the Loch of Lowes watching the ospreys. Ospreys have nested at the Loch for years and they can be watched on line. From the hides they are ~300 yards away; close enough for great views but a long way away for a 400mm lens and the weather was not great – overcast all of the time and raining most of it. Still, I saw the two resident birds and 2 more flew past to boot. I asked one of the wardens just how many ospreys were in the area and was told there were 55 breeding pairs in Perthshire plus a number of non breeders. I had no idea there were so many up there. It makes my sighting of 4 pretty average.

Whilst the bird are always in sight they approach and depart from the far side of the nest so they never actually came closer than the nest itself.  Also they don’t often fish on the Loch of Lowes itself preferring to go along the valley to the neighbouring lochs. One of these (Butterstone) is a trout fishery and you can (if your luck is in) watch the ospreys fish there whilst have morning coffee or afternoon tea from the cafe at the fishery. I had a coffee there and 2 ospreys turned up but they circled high up for a few minutes before drifting off west without actually fishing.
On the Saturday I spent the early hours of the morning on the coast just west of Dundee (the easiest place to get to sea/beach) where I found several flocks of eider (the males coming into eclipse) with each flock having a few red breasted merganser with them. Also along the beach I found curlew, oyster catcher and a lone bar-tailed godwit – nothing exciting but nice to see.


Around lunchtime we departed for Oban. I would have liked to spend a few days at Oban trying to see the eagles but time didn’t allow and my hope was to see black guillemot (a life tick) which live in the harbour. The journey from Perth to Oban took 3 hours and it rained most of the way. Luckily soon after we arrived it cleared up and whilst not sunny it was dry so at around 4 pm Angie and I walked down the harbour. We checked around the pier and found nothing of note – just a few herring and common gulls. I think the guillemots lived here once but there is a lot of touristy activity on the pier now (including 2 large restaurants) so they may have been scared away. As we stared to walk north along the prom (Corran Esplanade) we found a  confiding rock pipit and 2 hooded crows pecking at what I thing was a dead juvenile jackdaw.
I had been on the lookout for hoodies throughout the drive from Perth but saw none so this was a real bonus. The hoodies took no notice of people (including me) walking along the esplanade but as soon as I stopped to try and photograph them they were off. Fortunately the lure of the jackdaw was too great an opportunity and they soon returned and I got a few shots.
In normal times I would have spent more time with them but we still hadn’t seen a black guillemot so we moved on. Half way along the esplanade I spotted some movement way out to sea – my first black guillemot - then Angie spotted a head poking out of the sea wall a hundred yards or so away. The guillemots nest/roost in the storm drains and lot of shots are on the internet showing them looking out but it was great to see it.

The next hour or so was spent watching a lone pair of black guillemots. Their time was spent in the drain, flying in a circle out to sea and back and resting on a small jetty covered with sea weed. They did allow me to get pretty close when they were on the jetty but they didn’t land on the prom itself – something they are reported to do. Eventually we spotted another pair way out to sea. 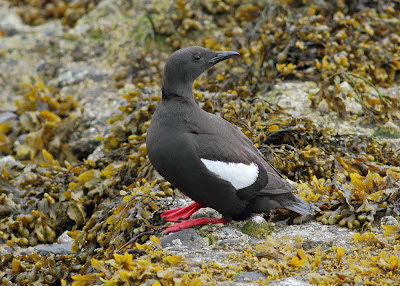 After dinner (~9.30pm) we walked along the prom again but there was still only the two present..
The next morning was dry but overcast and I got to the prom at 5.30. Still no guillemots around the pier but along the prom up towards the cathedral I could see several sitting on the top of the sea wall/prom and hurried off for a closer look. I needn’t have bothered hurrying because they were there all morning.
I quickly marched up, ignoring the hooded crows, and started the taking pictures of the birds sitting on the prom (despite the light being rubbish).
As I hung around the guillemot numbers increased to 26 and the views were outstanding - at times they were too close to photograph – whilst standing above one of the storm drains they would fly straight at me into the hole or land 4 or 5 feet away from I was standing then even walked towards me. The experience was similar to the puffins at Skomer and like Skomer I took hundreds of pictures of them - on the prom, on the weedy jetty and on the water. 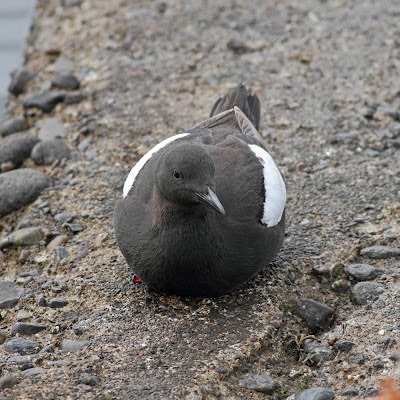 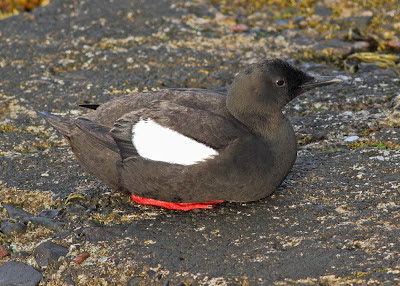 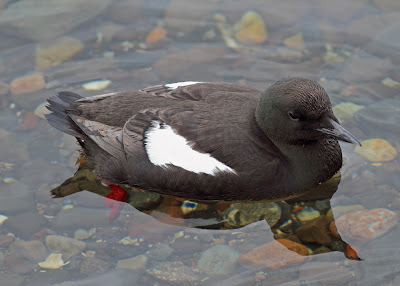 As the tide was in there was 2 or 3 feet of crystal clear water beside the sea wall so you could watch them flying underwater as they fished. The light slowly improved a little and some very pleasing shots were obtained but it was not good enough for BIF. Around 8.30 I returned to the B&B for breakfast and we packed up to leave. Just as we were getting into the car the sun came out so we had to delay our journey south whilst I took some more pictures. I concentrated on BIF shots but despite the light being better I still struggled – dark birds, loads of glare from the water and them flying at 200 mph – it was very like trying to get shots of puffins in flight. 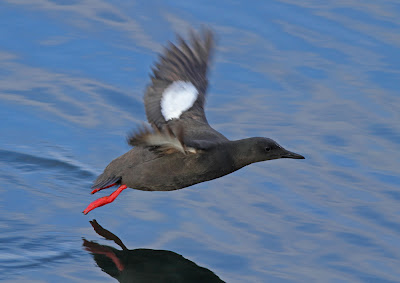 I’m not sure where they were in their breeding cycle because some seemed to be courting and there was no evidence they were bring fish to the nest. There was also the occasional fight which was somewhat more dramatic than coots because the fight took place on the water, under water and in the air: 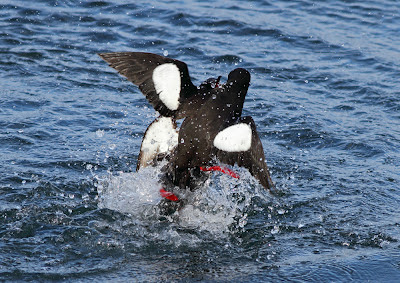 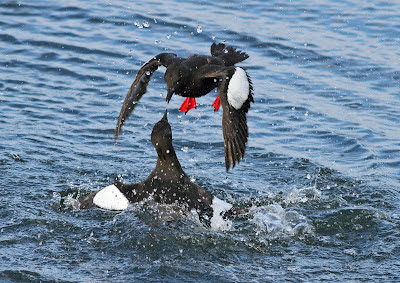 After a while the sun disappeared and It was off the Ambleside (Lake District) for 3 days where we had a great time walking, sight-seeing and eating but the birding was poor. I only birded pre-breakfast and the first morning I went looking for dippers. I tried several different streams in the area but no luck. It proved very difficult to follow a stream for any distance because they either disappeared into deep gorges with no stream-side paths or off into private gardens/land. Also the streams were also more like raging torrents after all the rain the NW had suffered.
The second morning I drove up into the hills (Kirkstone Pass on the A592) to try my luck with some upland species. The drive up provided mippit, pied wag and skylark then I parked at what I think was Broad Stone (just a car park and a pub) and walked up the very steep track towards the rocky outcrops. On the way up I could hear a golden plover calling but I couldn’t find it though whilst searching I did find 2 male wheatears  and I heard a ring ouzel call once but that was it really.
The lakes themselves were pretty devoid of bird life. The only wildfowl we saw were species who liked being fed bread – mallard, mute swan, plus greylag and Canada geese; we didn’t see any other duck species.  Before we went I searched the internet for birding reports from the Lake District and found very little and what I did find was about the coastal reserves. There was nothing about the lakes and hills...........I think I found out why!.
More pictures of the guillemots will appear on my Flickr site for anyone interested

Posted by Greater Kent Birder at 14:33