This last posting on our trip to Mid Wales will concentrate on small birds - redstarts, flycatchers and finches.
After breakfast each morning we went to Gilfach and I spent 2 sessions there with the pied flys and redstart, my principle aim being to get a decent redstart picture.
On Monday we eventually managed to leave the hotel at about 9.00 the delay being because Steve was trying to stop his camera sling from squeaking! We did see the garden redstart and spot fly whilst we waited but they were very shy. It was the only spot fly I managed to see during our visit.
Once at Gilfach we stopped at the Otter hide and asked the only guy there how things were. Very quiet he suggested, with the birds keeping high in the canopy or in the nest boxes - 2 were occupied by pied flycatchers within 10 yards of the hide. Well, we put out some meal worms (as he claimed to have done) and within a minute or two we had pied fly (male and female) and a pair of nuthatch feeding within 4 or 5 yards of where we were standing. We weren’t in the hide, we were outside and in full view of the birds! I don’t know whether the guy in the hide didn’t want us there or was blind but we got some cracking shots.

The only downside was there was no sign of the dipper that nests beneath the adjacent bridge.
We then went up to the visitor centre. When we arrived there were 2 photographers already there, one with a blue hat (referred to in the dipper post as Pillock) who had a 500mm lens and was standing about 4 yards from the wall upon which the redstart lands and another guy. Pillock told us the redstart wouldn’t be put off by how close we were so we put out some meal worms. He then talked to his mate and anyone else within 20 yards at the top of his voice for the whole morning – normally about some football team or another or how he was a professional photographer working on a commission.  Amazingly the pied flys were not put off by his noise but the redstart was very cautious and wouldn’t come into feed.
Also seen around the visitor centre was siskin and redpoll but they too were pretty skittish and didn’t linger long on the seed feeders by the wardens house and on one of the days we had a singing and displaying crossbill high above where the redstart was feeding.
We returned to Gilfach on Tuesday morning but this time went straight to the visitor centre. At the beginning we had the place to ourselves, we set up the cameras a little further away from the wall from the previous day, put out some meal worms and waited quietly. We soon had the male redstart feeding pretty freely, though it was never as confiding at the pied flys who would sit there for ages as we fired away with the cameras. 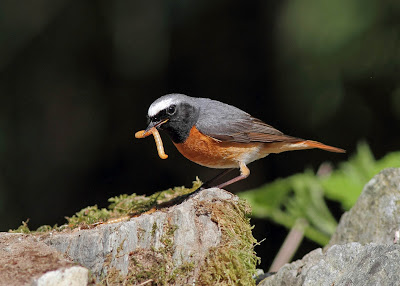 As the morning progressed a few more photographers arrived (but thankfully not Pillock) and although the redstart continued to come to the wall I went down to the Otter hide hoping for the dipper. I saw it but that’s about all you could say.
Tuesday, after Gilfach we went to Nant yr Arian for the kites (see earlier posting) but the real highlight for me were the feeders. They were right by the visitor centre so you could watch siskin, chaffinch and green finch at close quarters whilst having a cuppa – my type of birding. Also in the adjacent woodland was a pair of bullfinch. These wouldn’t come to the feeders but they did feed on the ground below them and land in the bushes 30-40 yards away. Getting siskin shots on the feeders was trivial as there were normally 3 or more on the feeders at any one time but getting them on twigs, in the sun and un-obscured by twigs took a bit more effort...... but not a lot.


Our only disappointment with the feeders was the lack of redpolls; we didn’t see any in the reserve but we did see  redstart and pied fly on the path leeding to the kite feeding area.
So that’s about it for my Ashton Tours account. We had no rarities but then we didn't go there for that reason. We succeeded in photographing most of our target birds - red kite, buzzard, dipper, redstart and pied flycatcher but failed with  wood warbler though they were in the Elan valley.  We found one on the hill a couple of hundred yards from the hotel and there was a pair on the hillside near the dippers but the views were at best fleeting and always distant though in reality we didn;t put much effort in.

Posted by Greater Kent Birder at 20:45