Last week my daughter came home from university. As normal after a week or two of wall to wall partying she had a cold/chest infection which she very graciously gave to Angie and me. As a consequence I spent most of Saturday, and all of Sunday and Monday in bed or on the settee feeling sorry for myself.  Today I felt a little better so I decided to check out Backsand (again did I hear you say?).  Each year it seems to throw up one or two goodies but thus far nothing too exciting but one can only hope.
Today I arrived at 9.15 which normally would be regarded as a bit early for the 11.30 high tide but when I arrived there were quite a few birds already at roost - 10 greenshank, 31 redshank, 3 black-tailed godwit (quite a rare visitor to BS), 1 green sand, 2 little ringed plovers and 30 lapwing.
Possibly due to the excavation work now on going around the scrape perimeter the birds are  roosting just about as far as one can get from the photographic hide – on the far bank and to the west of the hide on that side though I suspect you can’t see them from there due to the height of the reeds.
Whilst the shanks were roosting the blackwits and LRPs were actually feeding and the LRPs slowly but surely worked their way across the mud banks and eventually made it to the island immediately in front of me. The light wasn’t in the best of directions (from the right) but they stayed in front of me for 15 minutes or so, so a lot of pictures were taken. One of the birds was a juvenile and the other, I assume, its parent because the adult objected to a lapwing getting close to the juvenile. 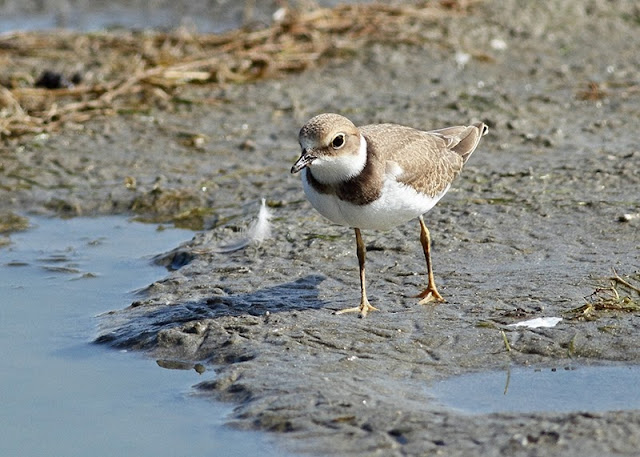 The adult only came close for a couple of minutes. 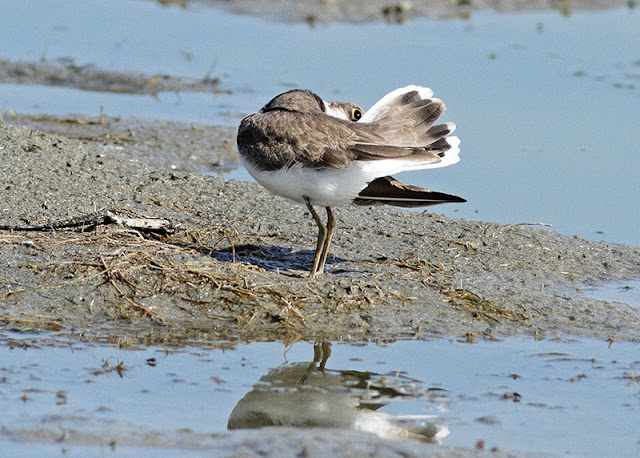 By now it was high tide and the numbers recorded were 26 greenshank, 40 redshank, 6 blackwits, 2 common and 2 greensands, 42 lapwing plus 2 little egrets and a grey heron.
In general nothing moved at all though the 2 green sands dropped down in front of the hide for 5 seconds.

The black tailed godwits were a little interesting in that they were quite orange but without any of the chest bars normally shown by an adult in summer plumage. I assume they are juveniles but they were a lot more orange than I thought a juvenile would be from the field guides. The picture is pretty poor but it should give you an idea of just how coloured they were. (It seems Icelandic juveniles are strongly coloured).

Access:
I used the revised route and wasn’t challenged today though the fence we were told would be erected hasn’t been.  They are now work on the bund along the access path so you get very close to the excavators – so if you go beware.

Posted by Greater Kent Birder at 22:28