There are about a million wrynecks in Kent at the moment and I’ve not seen any of them. I suppose I could have twitched the one at Grove but I wanted to find my own one. To this end I have spent the last few mornings looking searching along the cliffs between Kingsdown and Hope point. It has not been a resounding success.
The other problem was I didn’t want a distant view of one disappearing into a bush I wanted a dopy cooperative one similar to that that frequented Hope point a few years ago:

On Monday I did the cliffs and a short spell in the gullies at Sandwich, Tuesday the cliffs then Backsand and today the cliffs and Restharrow.
On Monday I’d seen very little until I got to the garden of Ship House (by the back entrance to the golf course) there I found chiffchaff, a garden warbler, lesser whitethroat plus 2 spotted flycatchers which was rather nice (though I only managed a poor shot of the garden warbler).
I then moved onto Hope point and had a chat with Brendon – quite a few  whitethroat (both kinds), a couple of whinchat but no wryneck. I had another look at Ship House garden and saw the flycatchers again but nothing else of note so departed for Sandwich. On arrival I found Steve Raynaert and Alan Ashdown looking for a wryneck that had been seen a few minutes earlier (not seen again) and I then heard that a Western Bonelli’s warbler had been found exactly where I had been looking just 30 minutes before. To rub salt into the wounds someone spotted a wryneck along there as well.
They say better to be lucky than good.... well I managed neither.

Tuesday, undaunted, I was back on the cliffs to resume the search. Very much as before with not much seen until Ship House gardens where I found 2 pied and a spotted flycatcher:
Another search at Hope point yielded several lesser whitethroats but no wryneck.
Around midday I went down to Backsand. High tide on Tuesday was 16.30. I wasn’t going to be able to stay till then but most birds normally come into roost 1-2hrs before the top of the tide so I expected to see most of whatever was going to come in.
When  I arrived 59 lapwing, 16 redshank, 1 green sandpiper and a snipe were already in residence as were 7 widgeon. The numbers then slowly climbed to 48 redshank, 13 greenshank, 2 green and 2 common sands but in general everything was on the far side of the scrape.
The 2 common sands came in very noisily and landed ~ 20 yards away and almost immediately 2 little stints landed alongside them. They only stayed a few moments then moved to the far side.
The rest of the session (until 15.30) was spent hoping they would come close and watching for any other arrivals - 3 dunlin and a wood sand turned up but they too landed miles away.
It was close to being a photographic  “duck” when one of the stints had a fly around the scrape then landed right in front of me where it fed for 10-15 minutes. 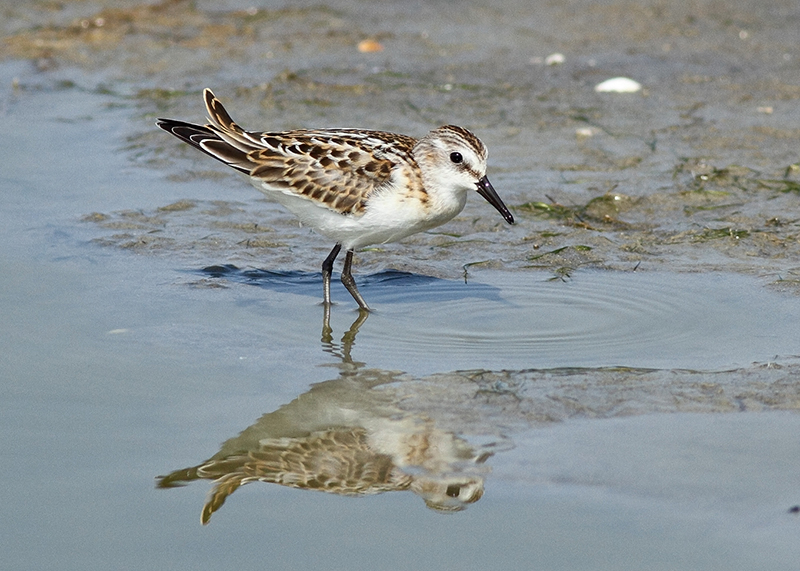 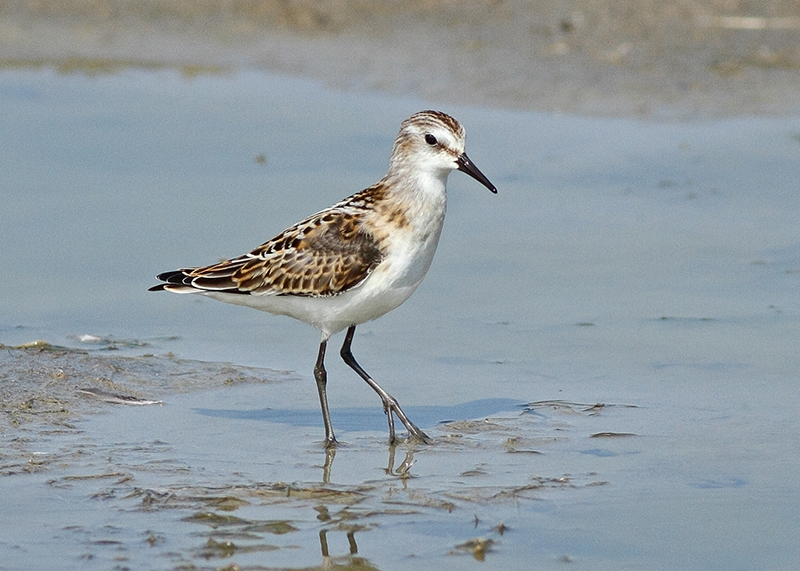 As the saying goes “Everything comes to those that wait”.
Today’s outing along the cliffs was pretty unproductive but I did find both spotted and pied flycatcher in the garden.
Warblers in general were few and far between the only exception being common whitethroats – I found a group of around 10 at hope point; it looked as if a couple of families had combined because a lot of them were youngsters. I did find a very dull looking willow warbler (strong eye stripe, pale legs and what appears to be a long primary projection).
I didn’t hang around but popped along to Restharrow by way of a change. It was very quiet there as well though at last I saw the water rail:
So I missed the Bonelli’s, and failed in my wrynecks quest despite them being found all around me but the little stints were nice. C’est la vie.

Posted by Greater Kent Birder at 22:35