A Hole Full of Ring Ouzels

I actually went to Langdon Hole yesterday seeing very little but it was only when I was leaving I found out that  4 ring ouzels had been seen there earlier in the day.  I’d seen and heard none so today I went back.

I arrived around 8.00 am and walking down the main track to the Hole from the Reach Road lay-by I heard then saw 3 of the beauties from about 100 yards. Needless to say they flew off before they came in range then I saw the reason........another early morning birder/photographer – those buggers get everywhere. Still my hopes were high as he told me there were at least 7 present.
For the next hour or so I was constantly seeing them flying from one bush to another (normally 50+ yards away) and circling overhead but I could not get close enough even for a record shot. On several occasions as I walked past a bush I could hear them clucking within but could not see them and because of the geography of the hole you often couldn’t get round the other side.
I met up with Phil Smith and had a chat with the ouzels constantly flying overhead so I managed a few poor flight shots.
When Phil wandered off to complete his circuit I decided it was time for new tactics.
I knew where one was holed up so I hid behind some bushes close by and I resolved to wait it out. After a few minutes something was moving towards me............a chiffchaff.
Across the gully I spotted Steve Ashton and Mike Gould but I carried on where I was and actually managed a couple of record shots of other birds but the bird I was staking out remained unseen.
It had gone quiet where I was so I went to find Steve and Mike and found them talking with Phil – I wonder how Phil manages any birding; most of the time he spends talking.
As we stood around chatting it was clear that the birds had moved to this part of the hole and a clump of bushes about 50 yards away had several in it so we moved closer. Needless to say we failed to get any pictures but half a dozen ring ouzels flew out of the bush, over a ridge and eventually we followed. A say eventually because all this walking and (not) taking photographs had been too much for Steve and Mike so everything stopped for a tea break: 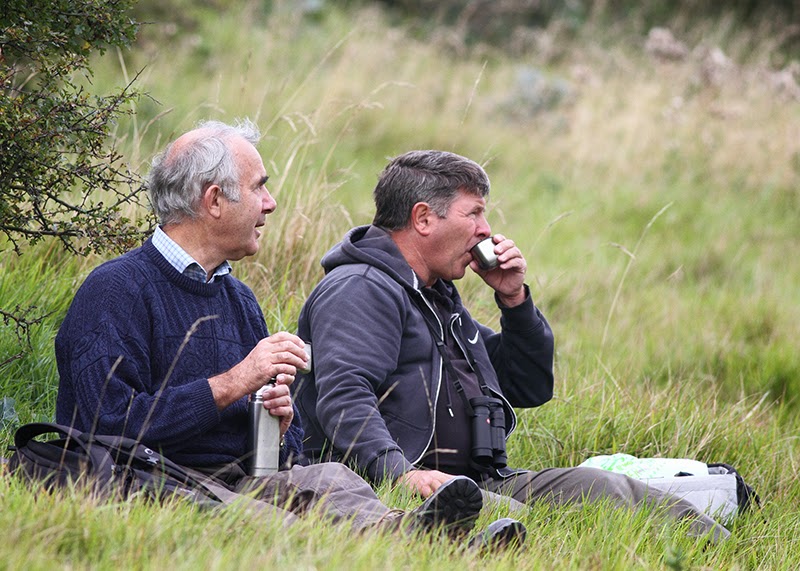 Over the ridge the ouzels were really very active and at last one landed in the open. A nice cock; shame it was above the skyline:
As we stood on the south side of a ridge we watched about 15 ouzels moving to the southern-most end of the Hole and once they reached there they flew back over our heads from whence they came.
At this point I gave up the chase and stood on a small ridge about 30-35 yards from one of the clumps of bushes they seemed to like. It was a good move because 4 or 5 ouzels came into this clump and on several occasions they sat in full view and I got some reasonable shots:
I thought I got pictures of one of the ouzels calling but on closer examination of the images I think it has regurgitated a berry and dropped it:


We continued for another hour or so but in reality that was that. 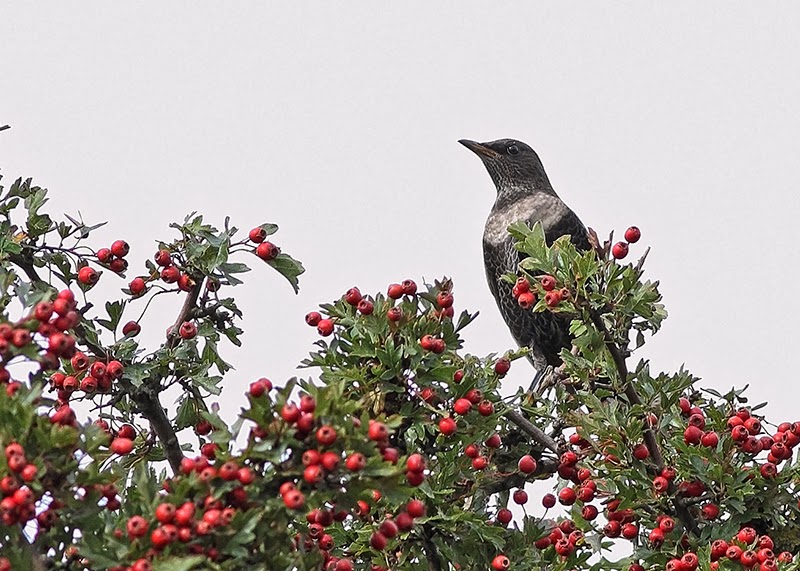 Around 11.45 we gave up and made our way back to the cars. A good call as the first drops of rain appeared just as we arrived at the cars.
All in all we think we saw 20-30 ouzels which was really great as I normally struggle to see one. I just wish they had been a bit more cooperative

Posted by Greater Kent Birder at 23:57