1..2.2014.
After breakfast I decided to download the results of the morning session onto my laptop and faced a problem of potentially catastrophic proportions - I'd left the camera cable at home!!!!! I didn't have enough cards for more than a day or twos shooting so I had to find a cable.
I walked up to reception, found our rep and told him of my problem. He told me they would have one at the Kairaba Avenue shopping centre so off to the  taxi rank.
On the way I had a chat with the driver about my problem and he said he knew the best place to go and when we got there he came in with me and told them of my dilemma. I showed the guys the camera and 2 minutes later they appeared with the required cable...eureka!!!!!
I asked how much and he suggested 250 D (less than £4). I know haggling is the norm in The Gambia but I was so ecstatic I gave him 300D and told him to keep the change! I think he thought I was mad.
So within 20 minutes I was back at the hotel and everything was hunky dory.
It was now nearly midday so Angie and I went to look for some sunbeds but needless to say whilst most were unoccupied they were all "taken". Eventually the sunbed man sorted us out somewhere to sit......but it just happened to be near the little stream! Oh the hardships I endure.
I had intended relaxing, reading and soaking up some sun but that proved impossible as there was a constant movement of black kite, yellow-billed kite and hooded vultures overhead so I end up checking every bird just in case it was something different.
I did try to get some shots but they were not up to much.
All thoughts of raptors and vultures disappeared however when a broad billed roller appeared in a leaf-less tree 15 yards away and around 15 feet above the ground.
Before going to The Gambia you have all sort of hopes of what you may see and get the opportunity to photograph and the broad billed roller was right up there (as were the yellow billed shrike, gonolek and robin chat I photographed in the morning) so here I had one of my target birds, at a reasonable height, in bright daylight but I couldn't get a clear shot of it. I circled the tree several times looking for an angle but these were the only views I could get. 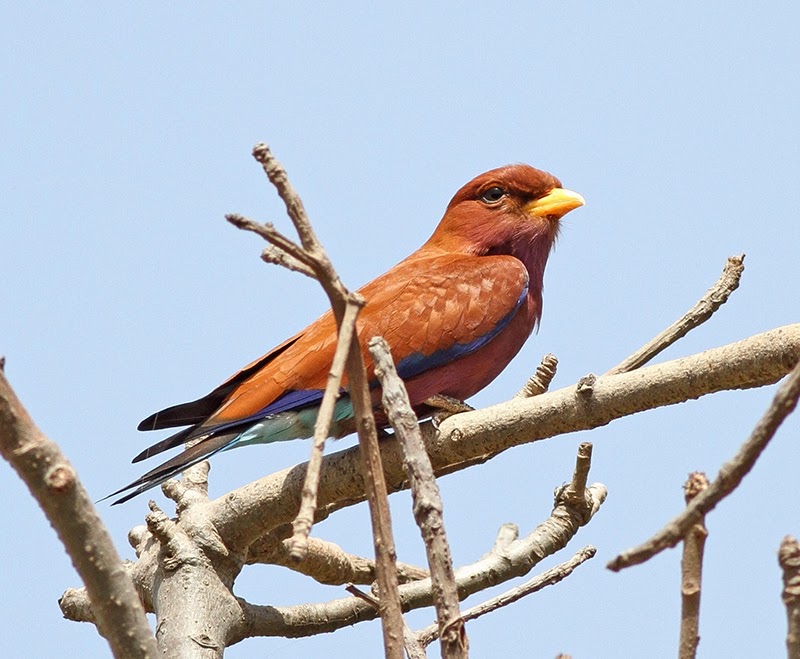 Eventually I gave up and settled back down to sky watch and soon after he flew off. That was not the end of the matter because late afternoon he returned only this time he was in the small dead tree you can see in the little stream picture of the previous post (the yellow-billed shrike tree) - he was around 8-10 feet up, it was 4.30 so the sun was lower and there were very few twigs to get in the way.
I started moving in, clicking away cautiously, from the side I was on just in case he decided to fly but he didn't and I got within 10 yards. He did however turn round so I went to the other side so as to get the light on his underside and moved so close that to get any closer would have meant some of him was out of shot. This may sound reckless but there were still people on sunbeds between me and him so he didn't seem phased by what I was doing. 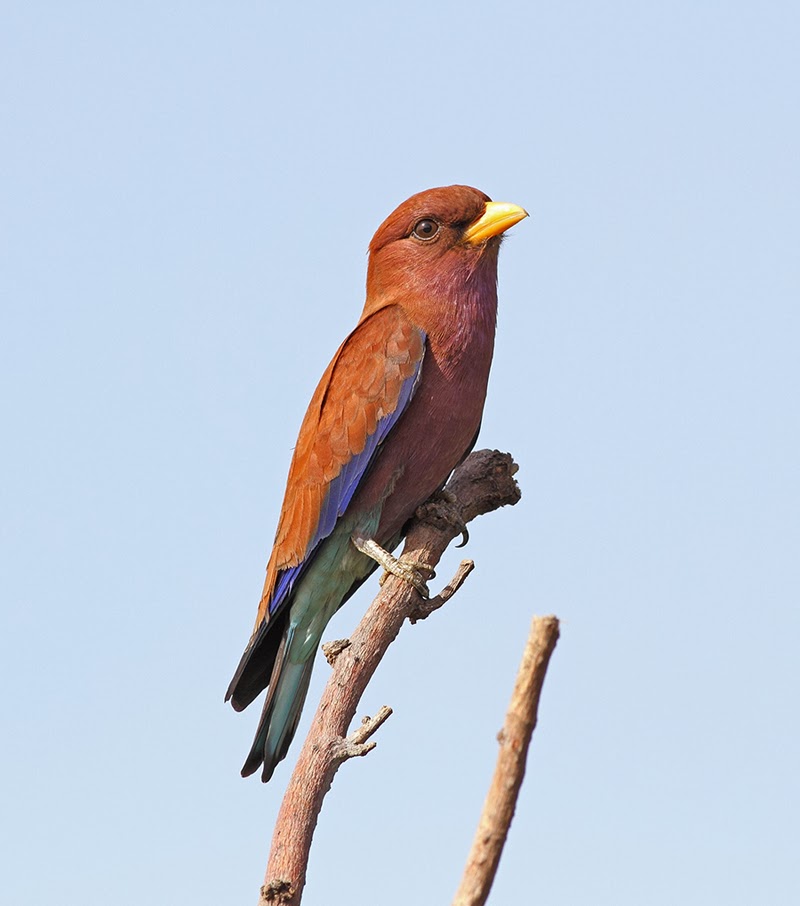 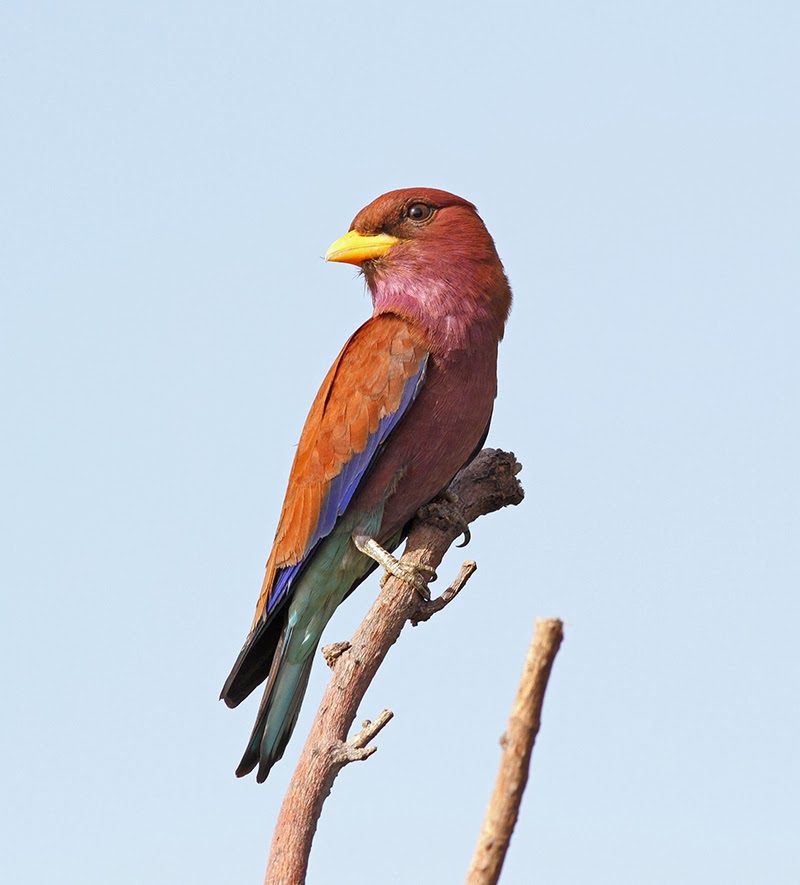 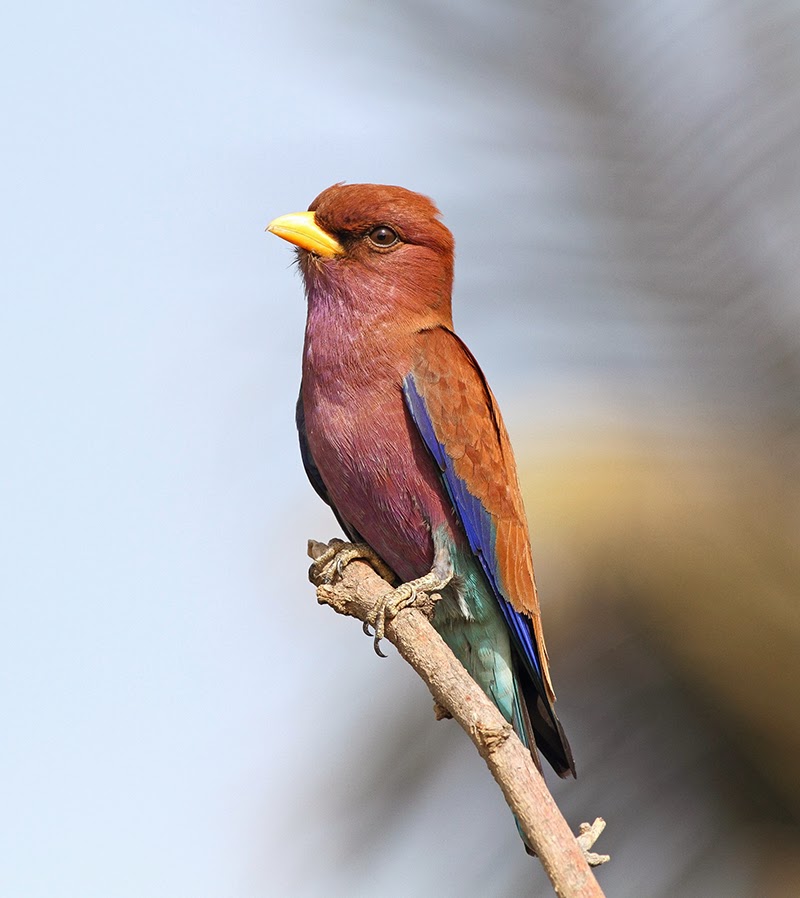 By now I had taken over 100 shots at different expoures, Iso and f number so thought that would do.
As I wandered off  I spotted the photographers from the Senegambia so I told them of his whereabouts and I think they had 30 minutes of blissful clicking before he finally flew off.

As it happens this was a resident bird, one of a pair calling the Kairaba garden home and they were on view somewhere most of the time though I never found them as low and in such a favorable position again.

So ended my first day. I had photographed at close range a number of target species and seen (and got record shots of) a lot more beside.
...and the green vervet monkeys put in an appearance in the afternoon....actually every afternoon: