For the last 2 days of the holiday it was back to lazing around the pool with my bird watching confined to the hotel garden. Since the number of new birds seen was pretty small I'm going to deal with these last 2 days together.
Both mornings I tried (and failed) to get some decent shots of palm swifts, but they are good enough to see what it is.
For the first few days of the holiday long tailed glossy starling were infrequent visitors to the Kairaba gardens but for the second half of the week they were almost constant residents. The same applies to a flock of around 30 piapiacs.


Also appearing in the garden for the last 2 days of the holiday were a family of 10 wood hoopoes. 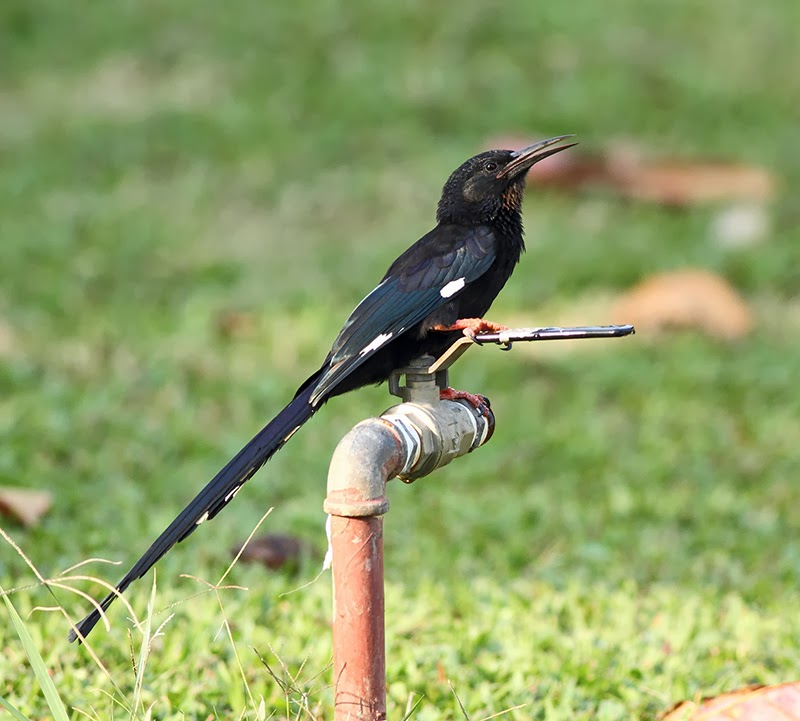 I've grouped these 3 species together because they were often together on the lawns, they are all dark, they all have long tails (so can be confused when you first encounter them) and given how often I saw them they were all difficult to get pleasing shots of. The starlings in particular didn't like you approaching and with all of them getting the angle to the sun correct for showing off their colours to best effect was a challenge.

A very common garden bird that I've not yet reported is the bronze manikin. These are tiny finches that go around in flocks of 20-30 but spend a lot of time feeding on the ground. I never had a lot of luck trying to approach them but if you sat/stood still they would come within a couple of yards of you. Photographically the problem was they were so small they were often obscured by the grass and you needed the right angle to the sun to bring out their colours. 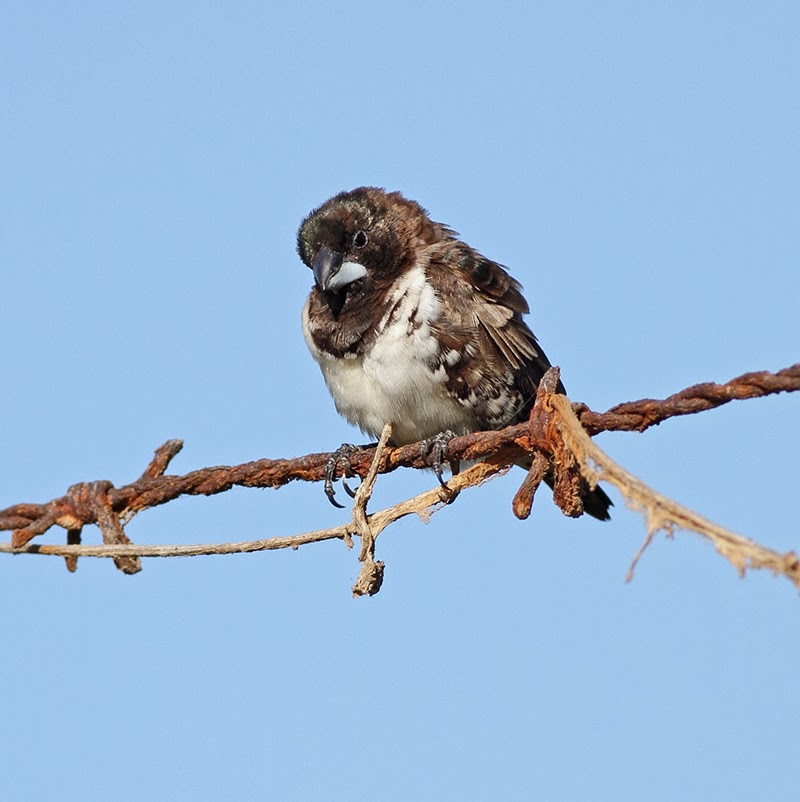 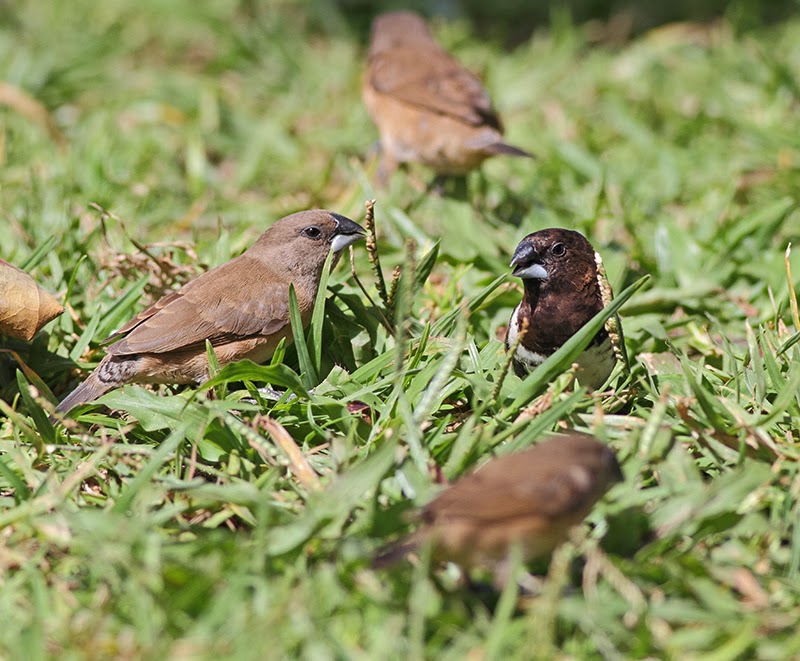 My efforts on trying to get shots of manikins perched up on grass/shrubs was finally rewarded, not with a good manikin shot, but with a picture of an African silverbill - the only one I saw.


I've also not mentioned pigeons and doves. These are literally everywhere, the problem is trying to sort out what is what with the collared doves.
The two pigeons seen in Brufut woods were easy - the African green pigeon and the black beaked wood dove.

The speckled pigeon and laughing dove were also easy to id:


Sorting out the 4 possible collared doves was looking to be a problem but it seems all I captured on camera were the red-eyed dove and the vinaceous dove. I have no idea whether I saw the other two possibilities.

Another new bird seen in the garden during this last 2 days  was the lesser honeyguide and there was a new garden tick in the form of a yellow-fronted tinkerbird (previously seen at Brufut woods).

Late evening of the 6th I also saw 2 oriole warblers from our balcony but they were gone before I could get the camera - a nuisance that because I don't think they are that common in gardens.

My final find of the holiday occurred on the last morning. I saw what I thought was a small dove fly up from one of the bird baths into a tree. I checked it out just in case and was really glad I did as just above me was  a shikra. I immediately took a few shots then moved several times to try and get a better angle. Amazingly it just sat there looking around as if I didn't exist. The views and light were not great but it was a fantastic bird to finish the holiday on. 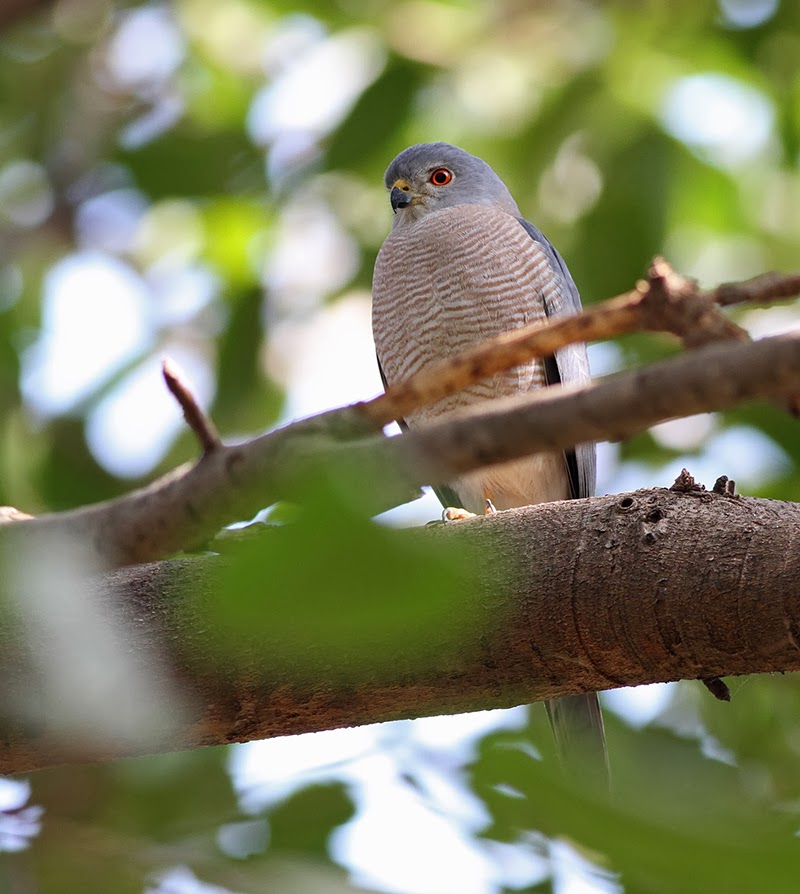 In conclusion Gambia was great; it was warm, it was sunny and a lot of the birds proved very approachable. The Kairaba Hotel was excellent and I managed to see/identify 48 species of birds in the garden and got decent photographs of nearly all of them.
The total trip list was 106, pretty uninspiring by many standards but it was a holiday rather than a bird tour and the emphasis was on photography rather than listing and to that end I managed to photograph 83 species so I was pretty happy.
And there's plenty to go back for!

Posted by Greater Kent Birder at 19:08