4.2.2014.
This was our second morning with our guide Mustapha Manneh (http://www.gambiabirdguide.org/) who again collected us at 7.30. Today we went to Brufut Woods which was south along the coast road then inland a mile or so along a sand track.
This proved to be a better place to see bird rather than photograph them because almost immediately we saw a violet turaco and a little later we saw the green version. Moving into the forest we went up small overgrown path and was shown a pair of African Scops owls then back on one of the main track a Klaas's cuckoo flew past - so lot of good/newbirds but only poor shots of the Scops to show for our troubles.

On the main track we stood around by a very productive group of bushes seeing hoards of sunbirds (variable, beautiful and splendid) and got some cracking shots of the splendid; the largest of the sunbirds we saw and thankfully one that was happy to hunt from a low perch: 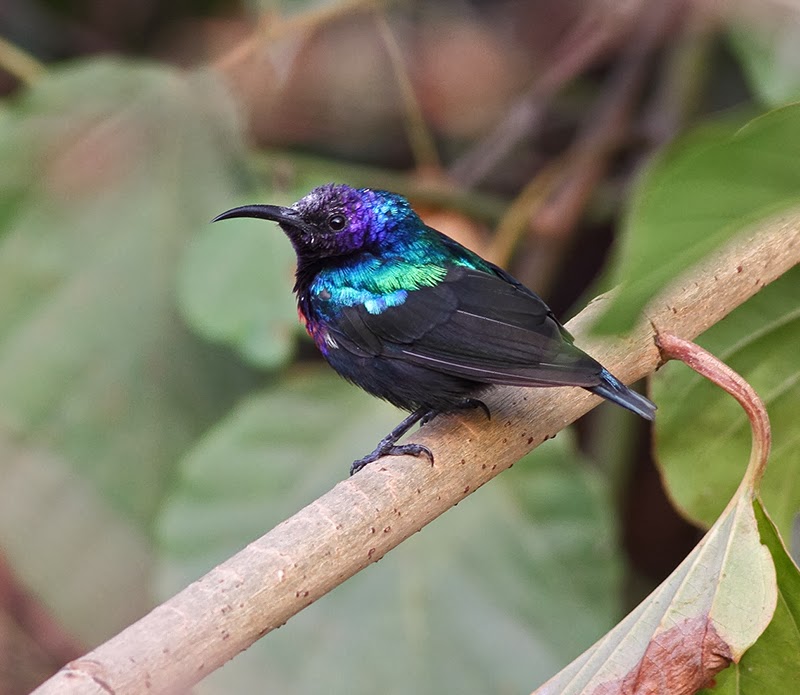 Also seen whilst we were standing there were yellow fronted canary, yellow fronted tinkerbird and orange cheeked waxbill and a couple of red-billed firefinches walked past in the long grass.


A walk along the track and a detour deep into the woods and Mustapha carefull stood us in one particular position and said look up........30 feet above us was a Verreaux's eagle owl being pesterd by a pied crow. Stand a foot either side and you wouldn't see anything! It's what you pay the guides for.


More paths through the trees revealed an African green pigeon, well several actually  (I did get some shots but they were very poor) and nearby a pied hornbill was calling which Mustapha promptly found.


Then it was into the 4x4 and off through the woods to another destination and after 20 minutes of searching - a long tailed nightjar. As most will know they don't move so these pictures were taken from about 5 yards but I couldn't get to a position where the sun was behind me.


After that we went to the rangers hut for a cup of tea and watched some finches and a blackbilled wood pigeon coming to a watering station and screen they had erected nearby but I was not a good place to photograph birds as there was only a couple of shafts of light reaching the watering troughs though the pretty thick canopy.
Unfortunately this was the only sighting of a lavender waxbill I had - a stunning bird that I would like to have seen in the open.

We then went searching for rollers and drove miles. First through along unpaved tracks then onto the main road searching the wires. We must have gone most of the way to the southern border with Senegal!
Eventually we found an Abyssinian and I got some decent shots then soon found a lizard buzzard perched on the wires and finally after an hour or so of searching we found a blue bellied roller; the target of all our searching.
Now the disaster. Whilst downloading onto my laptop this last set of images got erased/didn't download properly and by the time I found out I had wiped the cards! So 2 hrs of searching, a few minutes of joy whilst taking the pictures, then I'd lost the lot. Most tragic was the lizard buzzard shots which were pretty good because although being on a wire it was in bright sunlight unlike the other we'd see at Kotu.

Back at the hotel in the afternoon I was pretty depressed and didn't do much birding though I did find a tawny-flanked prinia.