Today we actually manage to leave the hotel gardens.
We were picked up at 7.30 by Mustapha Manneh (http://www.gambiabirdguide.org/) for the short drive to Kotu stream/bridge. I'd book Mustapha based on internet reports and had informed him I was after taking photographs rather than collecting ticks.
When we arrived it was still too dark for photography but on the mud (and general pretty distant or looking straight into the sun) we could see greenshank, redshank, wood and common sandpiper, Senegal thick-knee, black winged stilts, sacred ibis, whimbrel, grey heron, western reef egret and in the scrub/trees about 5 pied kingfishers.

Also in the scrub there were loads of juvenile/female beautiful and variable sunbirds (though I can't tell the difference in the field), on the ground red-billed firefinch and a few cordon bleu, and on the wires a western grey plantain eater showed well (I didn't takes notes so this list is from memory).


The best bird on view was a blue-breasted kingfisher but that too was distant and in a very gloomy position:


As the light improved so did our luck as in quick succession giant kingfisher, wire-tailed swallow and pied kingfisher all came close.


After about an hour we moved off going down a nearby track. We hadn't gone more than 70 yards when Mustapha said "little bee-eater". Where? I couldn't see it!!! He finally got Angie and myself onto these beautiful little critters then Mustapha told me to get closer for my picture. I did but promptly lost sight of the birds and had to be re-directed!. After much huffing and puffing getting the tripod into position I eventually got close, in a favorable position wrt the sun and filled my boots - absolute bliss.They seemed totally indifferent to my presence (or perhaps it was just excellent field craft). 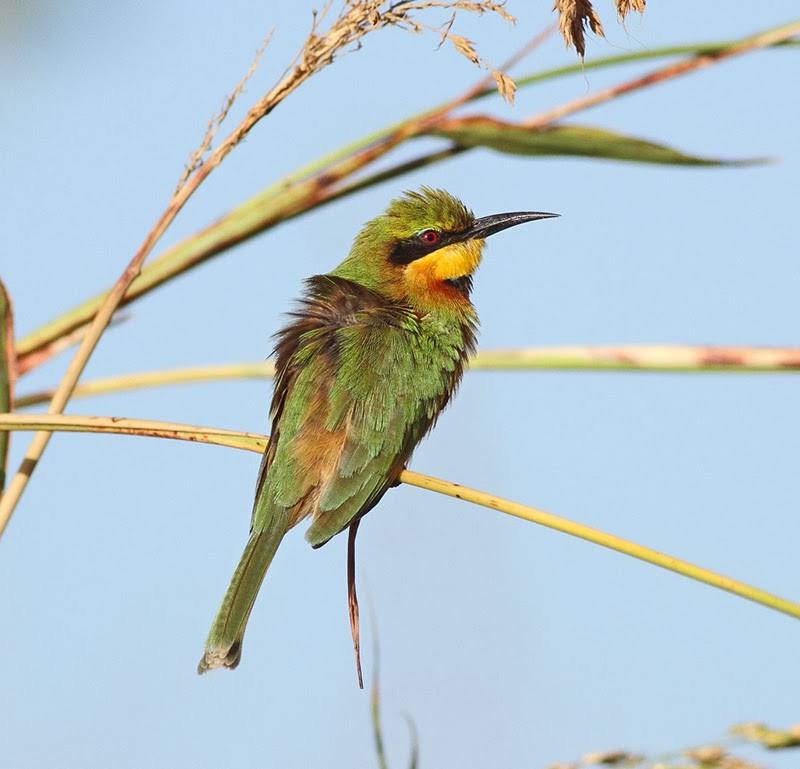 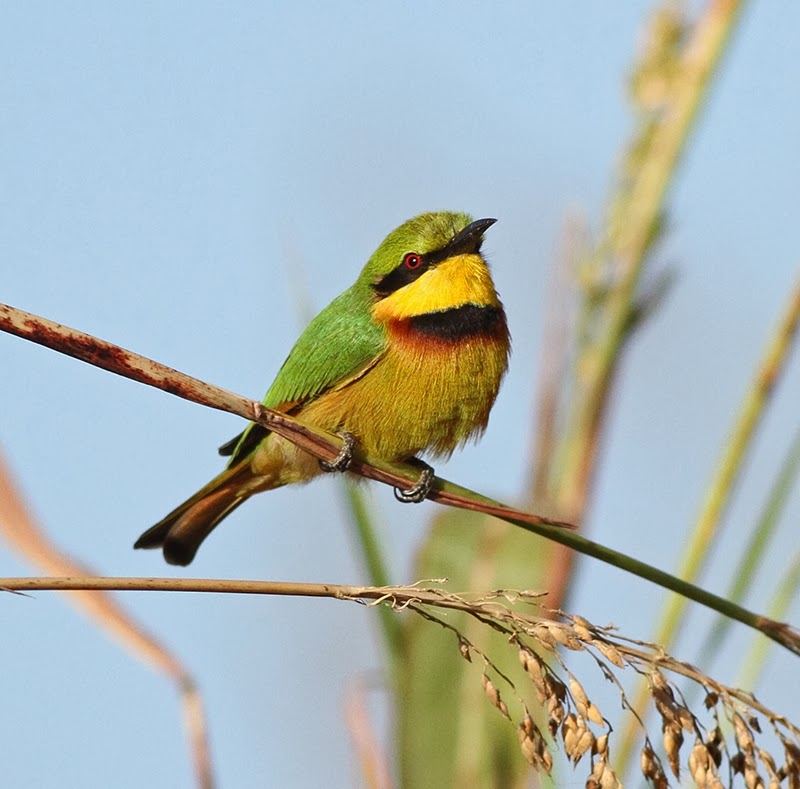 I could have stayed there all morning but eventually I had to give up as Angie and Mustapha were waiting but I had a load of stunning pictures in the bag; though none with an insect in the beak unfortunately.
As we moved on across some rice fields we could saw 20+ little bee-eaters flitting around on the edge of the mangroves - but too distant for a photograph.
Next stop was the sewage farm and they were discharging lorry loads of the stuff into the settling pool. Thankfully it didn't smell though the thought of what was going on did not impress Angie.
On the edge of the pool  were a couple of wood sandpipers, a common sand, an African jacana,  a dozen or so black-winged stilts, a similar number of spur winged plovers and on the bank a small flock of white faced whistling duck.


We then moved though some cultivated land seeing a bearded barbet, hoards of sunbirds, then through the mangrove/river bed via an elevated walkway onto Fajara golf course picking up a whimbrel on the mud.


On the golf course first stop was for a pair of pearl-spotted owlet though taking a shot from directly under them did not yield the best of results:


Fortunately it liked that perch because it came back in a couple of seconds with a catch and repeated the exercise a couple of minutes later. This time Mustapha didn't urge me to go closer so I stayed my distance and got a few reasonable shots.

Whilst we were watching it Mustapha pointed out a northern crobec deep in an adjacent bush; this was the only image I managed.


After 10 minutes we moved on.

We resumed our search for the roller but with no luck but time was moving on - it was approaching 11.00, it was getting hot and everything was going quiet.
On the way back to the car we found a black heron,  a lizard buzzard (but I was looking into the sun and it was in deep shade) and then very close to where we had started we finally found an Abyssinian roller. 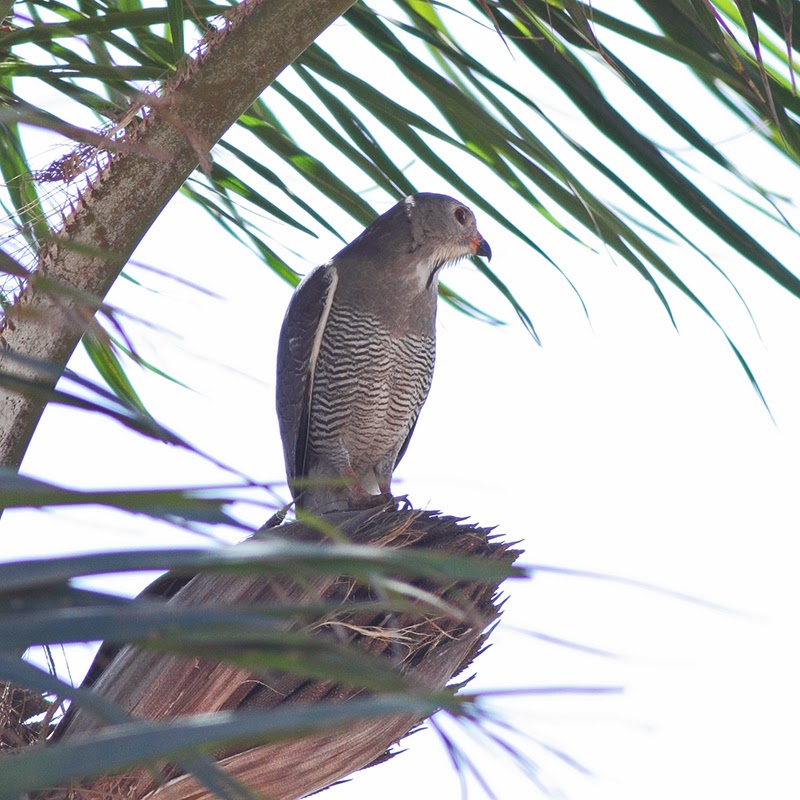 We weren't quite finished though because back by the bridge Mustapha disappeared for couple of minutes and when he returned said follow me. We did and he showed us this: 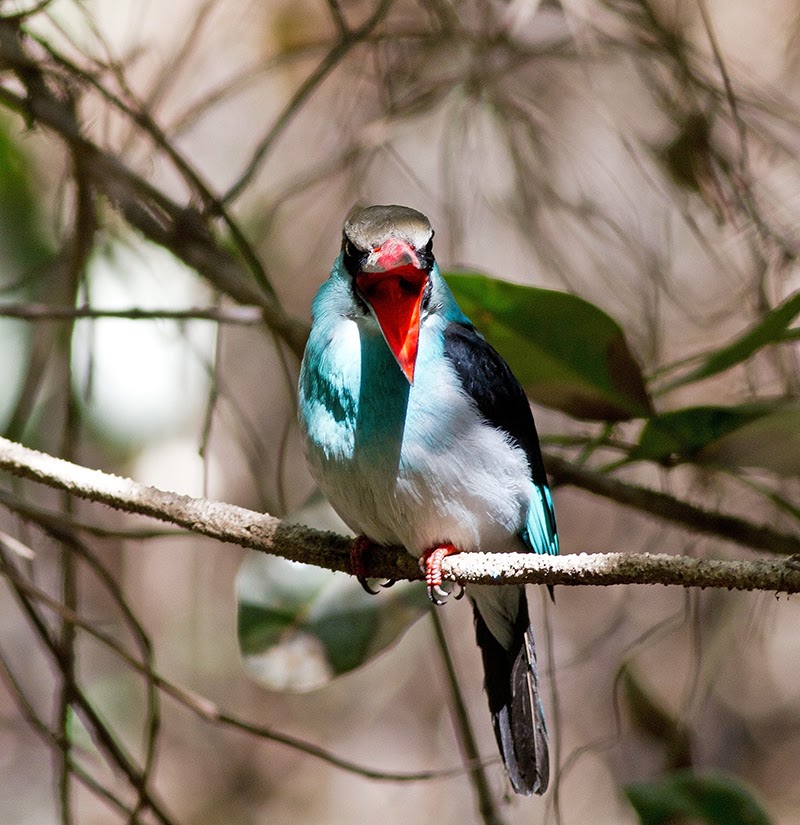 There were 2 of them. I assume it was their midday roost but by golly it stank of raw sewage where they were roosting so we didn't linger too long; just long enough for a few shots.

All in all a decent morning!

The afternoon was spent around the pool, sinking a few beers and seeing/hearing all the normal residents.

Posted by Greater Kent Birder at 16:29