The last 3 days of the holiday were to be spent being lazy (not that we'd been very active other than in the restaurants and bars) but today I had another 2.5 hr outing with Mustapha.
After finding out I had stupidly deleted the roller and lizard buzzard shots before checking they had downloaded properly I contacted him and arranged a trip with just the 2 of us to go roller hunting again. This time we went north to Cape Point.
We got there from the Banjul/Serrekunda Highway with views across a large wetland. We didn't stop but a few greater flamingos could be seen in the distance.
We stopped in a scrubby area with the sea a few hundred yards away and started to search for rollers.
The problem was I was constantly distracted by the large number of seed eaters around; red-billed fire finch, northern red bishop (non-breeding plumage), red-billed quelea plus a couple of zitting cisticolas.

After 15 minutes or so we found an Abyssinian roller on some wires and moved closer adopting the now normal routine of me in the lead and getting my angle to the light correct.


After getting as good a shot as I was going to the bird flew off but this time landed low down so off we went again. 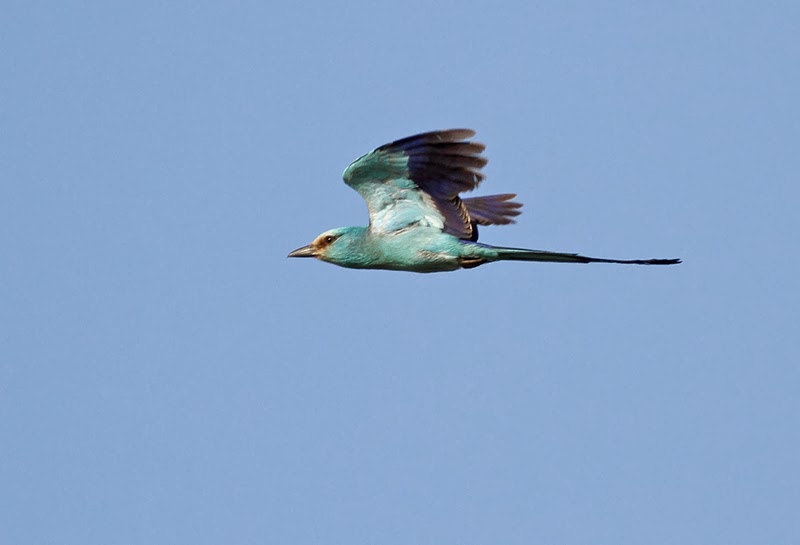 With the light behind me I approached it head on and got some decent shots then moved around the side of some scrub to try for some flank shots: 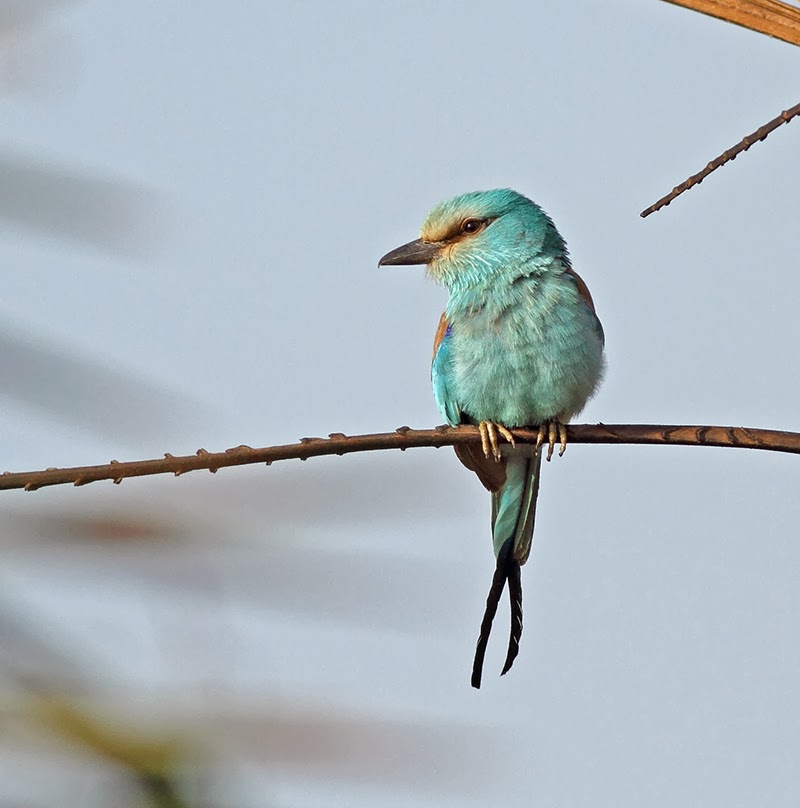 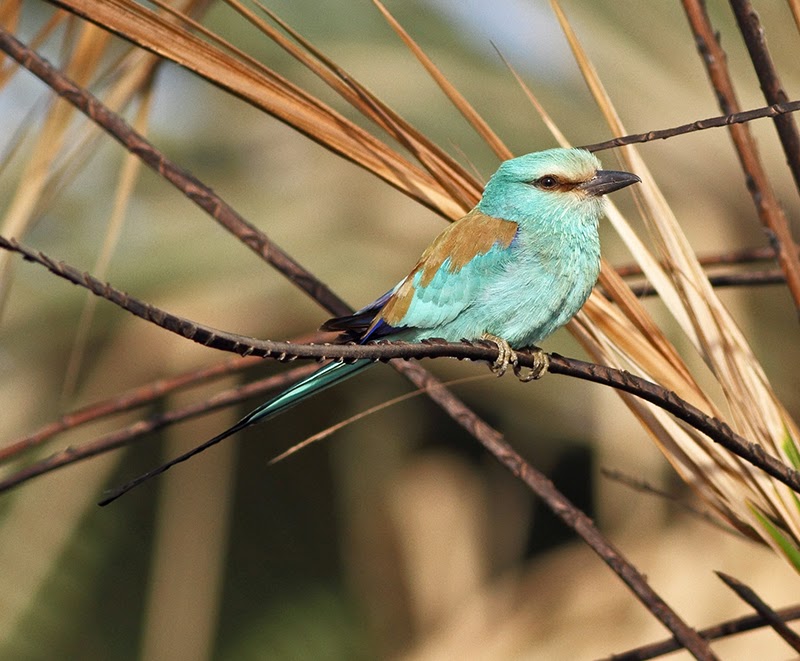 Eventually it tired of my presence and flew. 1st target achieved and the shots obtained were infinitely better than the wire shots I had lost yesterday whilst downloading.

Whilst this was going on there were a few Caspian terns flying back and forth so I grabbed a few flight shots and during the walk back to the car Mustapha found a woodchat shrike, and I took advantage of a very obliging spur-winged lapwing.

I'm not sure where we went next but as we entered a built up area there were a number of hirundines on the wires/in the air. Mustapha instantly said they were red-chested swallows and asked did I want to photograph them? Is the Pope a Catholic? We stopped.
I got out the car to get some shots with  Mustapha stopping a couple of the local kids from pestering me.
Also whizzing around were a few little swifts so I had a go for them as well.


Our next stop was near some market gardens. Mustapha pointed out a grey kestrel 100 yards up the road which I went after whilst he was asking permission to go through the gardens into the fields behind. I didn't manage a shot of the kestrel. Why is it that normal people (as opposed to bird watchers/photographers) can walk within a few yards of birds perched in trees/on wires with impunity but try to get close with binoculars or a camera and the bloody things are off whilst they are still distant specks?
I met up with Mustapha and told him of my failure but my disappointment instantly disappeared - he'd found 6 blue-bellied rollers on the electricity wires in the rice fields.

This time I took a couple of shots whilst we were miles away which was just as well as 4 of the blighters flew off almost immediately flying right past us. I only managed a couple of poor shots as they flew past because of the time taken to get the camera off the tripod but the one I did snap had a broken beak - it seemed healthy enough though. 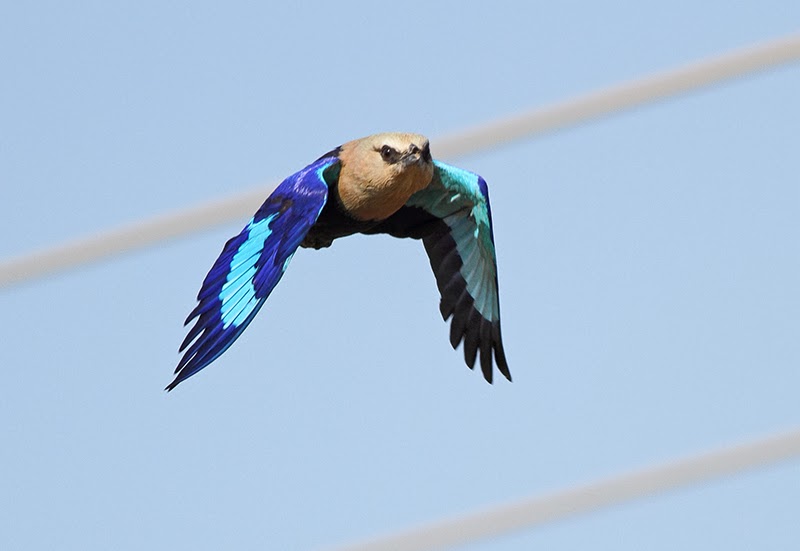 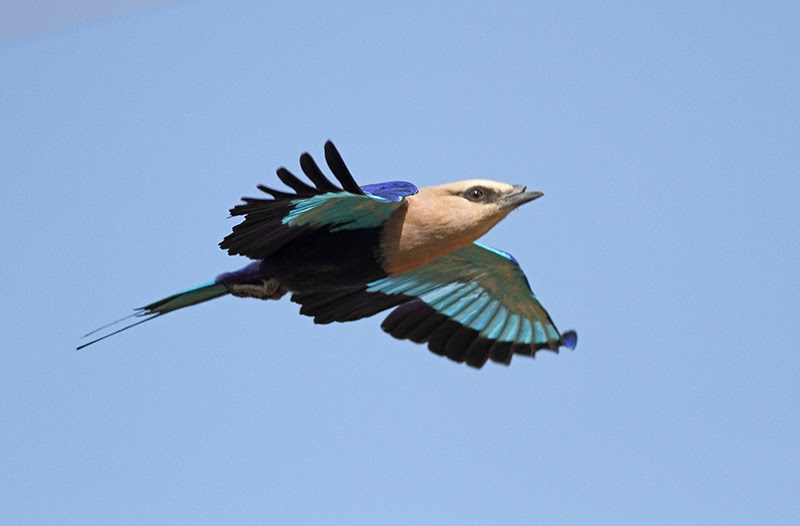 Happily one of the birds stayed long and let me get close enough to get some reasonable shots. 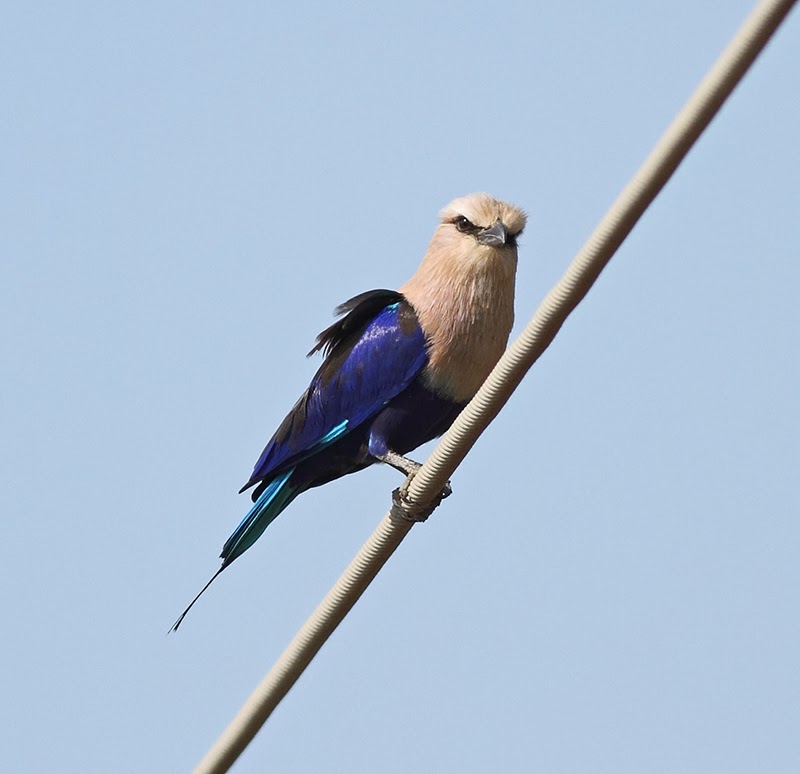 We then had a look around the rice filed where there were several good birds, in particular a small group of sacred ibis which were preening on the ground then decided to fly to a nearby tree: 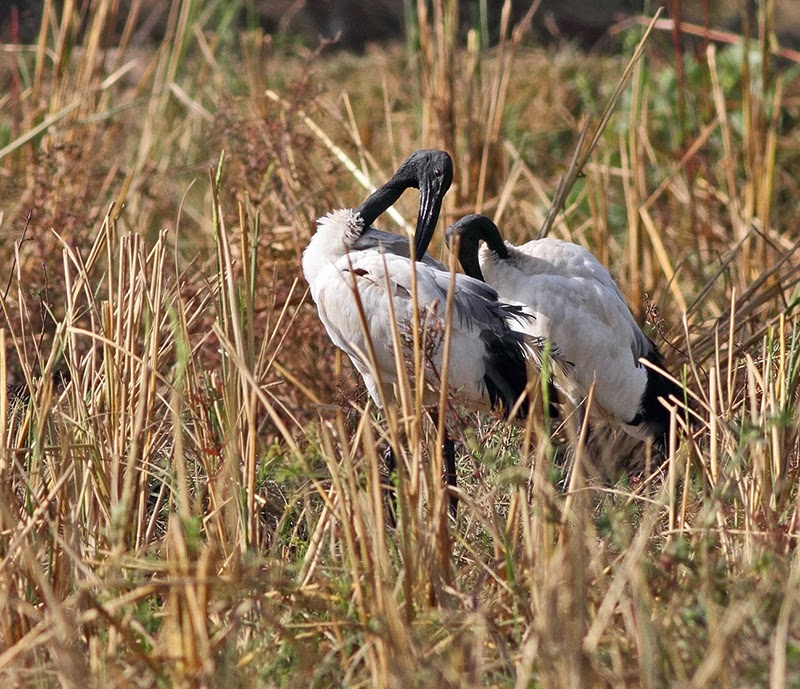 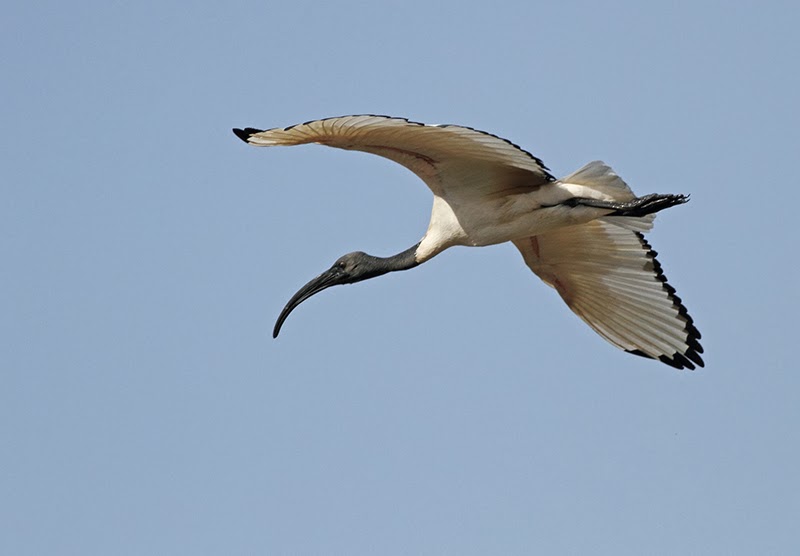 The red showing on the underwing is breeding plumage.
Also around were some African wattled plovers but the light direction was not great for these.


So that was that with Mustapha who had delivered in spades.  I was happy. He was happy I'd got the shots I wanted and  he'd got another couple of hours work. My 3 sessions with Mustapha had been great as I hope the pictures attest. For anyone interested contact detail for Mustapha can be found at http://www.gambiabirdguide.org/.


The days actions wasn't quite over though because a pair of African grey hornbills came through the trees surrounding the swimming pool and I managed my best shots of grey headed sparrow, African thrush and pied crow; all common species around the garden but ones that had avoided the camera up to that point (some times due to lack of effort on my part and sometimes because they insisted on hugging the shade).

I also found a beautiful sunbird nest - I was watching a female sunbird  hoping it would come down into camera range when it just disappeared. Whilst I searched for it I found the nest and missing bird high up in the canopy.