A lot of effort for little reward

The last 2 weeks have been hard going. Most days have followed the same routine - starting at Kingsdown I wander along the rifle range then check out the scrub by the toilet bock, occasionally I walk to Hope Point. Then it's off to Sandwich to check out Restharrow, the Elms and the gullies (which are still full of water). And on most days I have seen next to nothing.
Migrants have been almost totally absent from the Kingsdown patch with only a couple of chiffs showing in the last 2 weeks. The main interest has been provided by my pet linnets who are now feathering their nest:

A pair of peregrines have turned up on occasions, this pair being made up by a young, quite brown, female and a grey male with no sign of the hybrid. I don't know if it's the same pair as Tony Morris has been seeing at St Margaret's.

At Sandwich Restharrow has been marginally better and although I missed the geese that had recently flown all the way from Egypt I did manage to see the little ringed plover though it was always distant. I also managed an even more distant yellow wagtail tick.

The main interest and amusement on the scrape remains with the little grebes. When feeding they come very close to the hide and every now and then a couple of them will decide to have a bit of a dust up.

Unfortunately their pugilistic activities never seems to be close enough to get some shots of their attempts to fly but it leaves you wondering - how do they migrate? They can hardly get off the water!

The Elms and Gullies have been a little better in that there have been a couple of chiffs and several blackcaps present reminding you that spring has sprung but thus far these have eluded the camera.
Yesterday (Wednesday) when I arrived I was told of a common whitethroat (the first of the year) and this surrendered to the camera after about 15 minutes.

Today I did something different. Well not that different as it only involved driving to Langdon Cliffs.
I parked on Reach Road and the first bird I saw was a corn bunting, and must have seen half a dozen along the top there and all around was the song of skylarks. Walking down into Langdon hole there were quite a few linnets (30-ish?), a few yellow hammers plus a few chaffinch but that was it. No chiffs chiffing. Lots of jackdaws and a few blackbirds but overall it was looking pretty grim.....very Kingsdowny in fact.
I took quite a long time in the Hole looking for the ring ouzel reported there the previous 2 days but I couldn't find it.
I left the Hole and was walking up the hill towards St Margs watching and photographing some of the mippits (why do they only pose on fence posts?) when I spotted a black redstart....yippee. But that was as good as it got  as try as I might it wouldn't let me get withing 50 yards.


I followed it up to the top of the fence line where it upped and flew past me back down towards the Hole. I followed but as I went through the kissing gate into the Hole I spotted the ring ouzel.
It was on an open patch of short grass feeding but disappeared into a bush. I decided to wait and see if it would come out. I would have liked a closer hiding point but there was nothing on offer so I sat in amongst some short scrub watching the grass where it had been feeding which was between me and it's bush. Whilst waiting I saw 2 chiffs who were both silent and a yellow hammer landed pretty close.
Eventually the ring ouzel showed itself but needless to say it came out on the far side of it's bush on a different grassy area. It didn't stay there long though as a couple of dog walkers flushed it back into it's bush and there it stayed for another 15 minutes or so.
Out it flew and landed 40-50 yards away atop another bush then flew down to it's original grassy patch. It was still too far away for good shots but it was feeding nicely and slowly getting closer.........that is until some more dog walkers, then 2 joggers and finally a family came walking past. 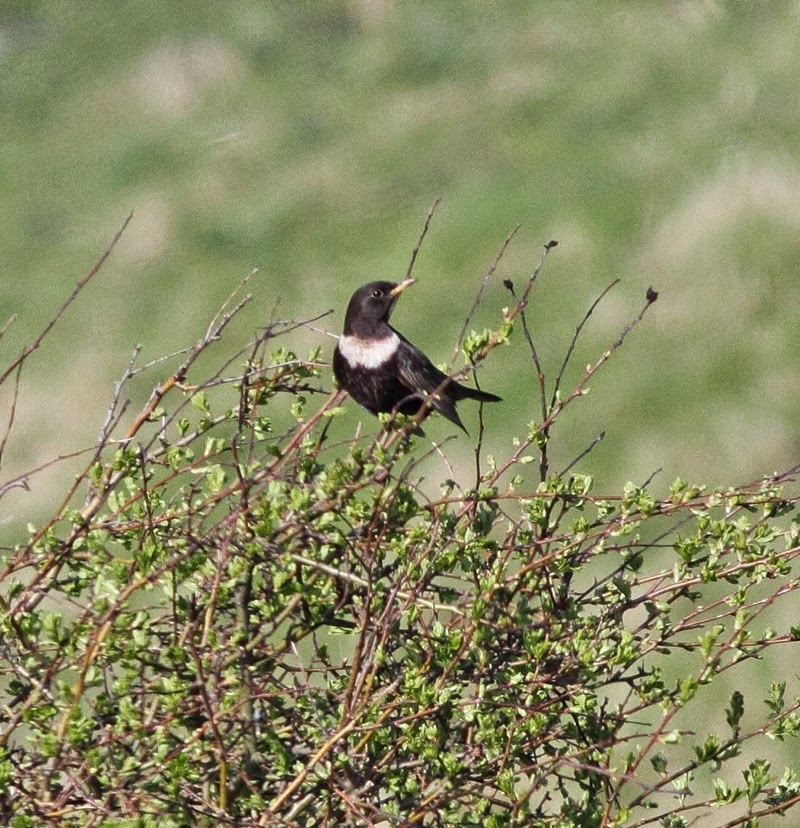 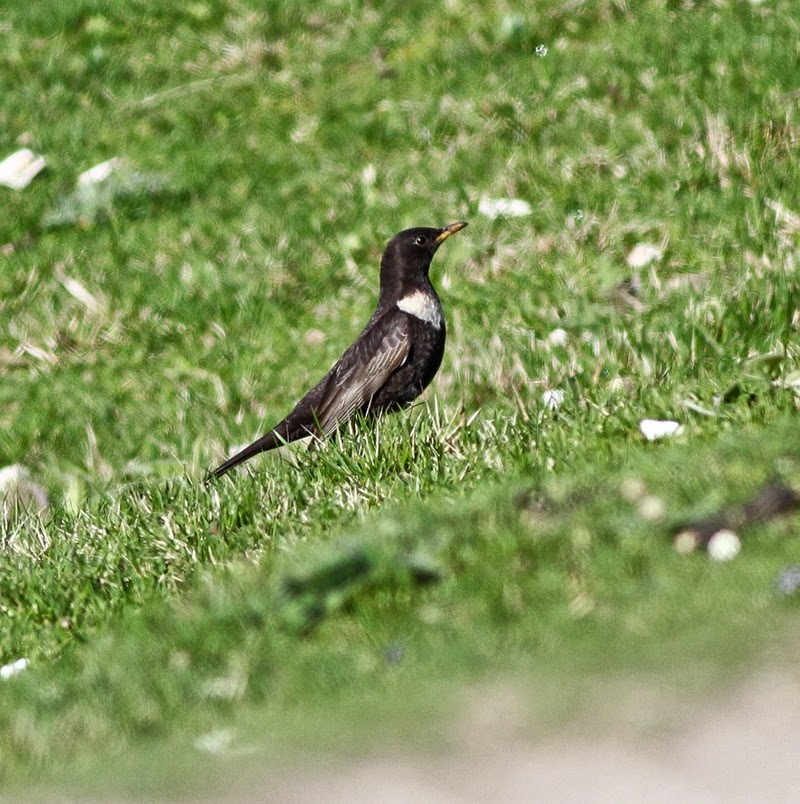 I new my luck was out when the family decided to stand just behind me, right out in the open, to watch what I was doing sitting in brambles. I did what any sensible person would do under the circumstances I gave up and walked away.

I walked up the hill towards St Margs again and spotted a peregrine distantly clinging to some flints on the cliff face. Eventually he/she let go and flew past but it was pretty distant and I was looking straight into the sun .....well that was my excuse.
And that was that.

Posted by Greater Kent Birder at 18:07