24th March.
Today was going to a birdwatching  morning for Pete and myself with a visit to the spar for the ladies.
We went out at 7.00am in an open topped 4WD with Rukmal, his normal driver and another bird guide who I had seen showing hotel guests around the gardens. I had hoped to see some difficult to find specialities (eg owls at roost) but I don't think there is a bird watching/bird guiding network in the area to locate these (unlike The Gambia) so the morning consisted of us being taken to several places known to be birdy and seeing what turned up.(The cost wasn't high - around £30 for the whole thing - guides/4WD etc so it wasn't as if we had been fiddled. ).
First stop was on the track running along the top of the bund of one of the tanks. There were trees on the bund, in the water, and birds were everywhere but photographically things were quite difficult because it was still quite early and a little misty.
This first stop produced 2 shikras, a lesser whistling duck (the only duck we saw in 2 weeks!), a heronry with several species of heron, black headed ibis and Indian cormorant in residence and several plain prinia.

Driving along the top of the bund  we had green bee-eater, more prinias and a black headed ibis in a paddy field. I got down to try and get closer to the ibis but then saw a paddyfield pipit on the bund track and Rukmal found a crested serpent eagle in a tree adjacent to the bund (I'd walked straight past it). Out on the lake there were pheasant tailed jacanas (the first we'd seen) but as I said the light wasn't good and we were looking straight into the sun. 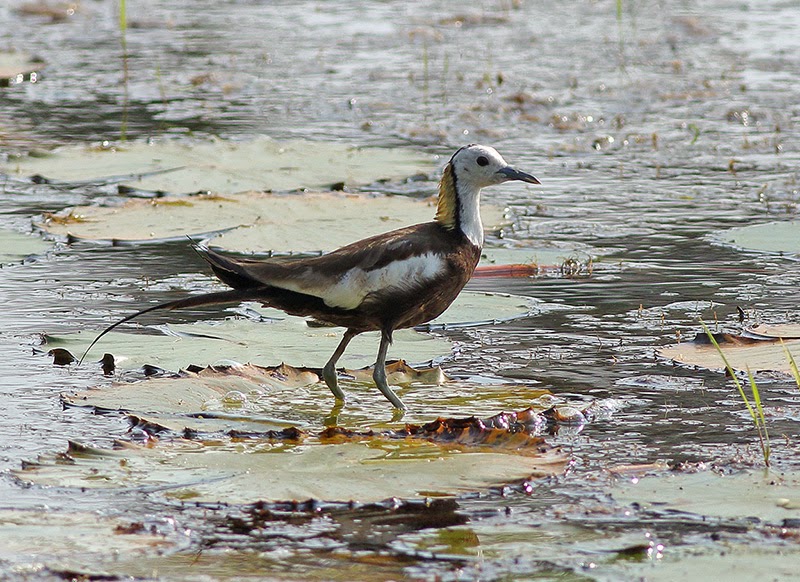 We moved on driving very narrow tracks and seeing several species of pigeon including green imperial pigeon - one I never found in the hotel gardens.
At one point we went into some scrub which had a electrified fence across the track to keep the elephants in/out depending on your view point and on to another lake where we were again looking into the sun! (Actually the same happened all the time in the Gambia - I have no idea why guides don't consider whether you are looking into the sun when choosing where to go; it's a pain when bird watching, when trying to photograph what you see it make life near impossible).
As we pulled up by the lake we found a great thick-knee, more green bee-eaters and our first sighting of blue tailed bee-eater (too distant) and brahminy kites kept drifting past. On the far side of a lake a white bellied fish eagle was hunting then landed on a dead  tree but again too distant to photograph. We were told a white-rumped sharma was calling but we never saw it. 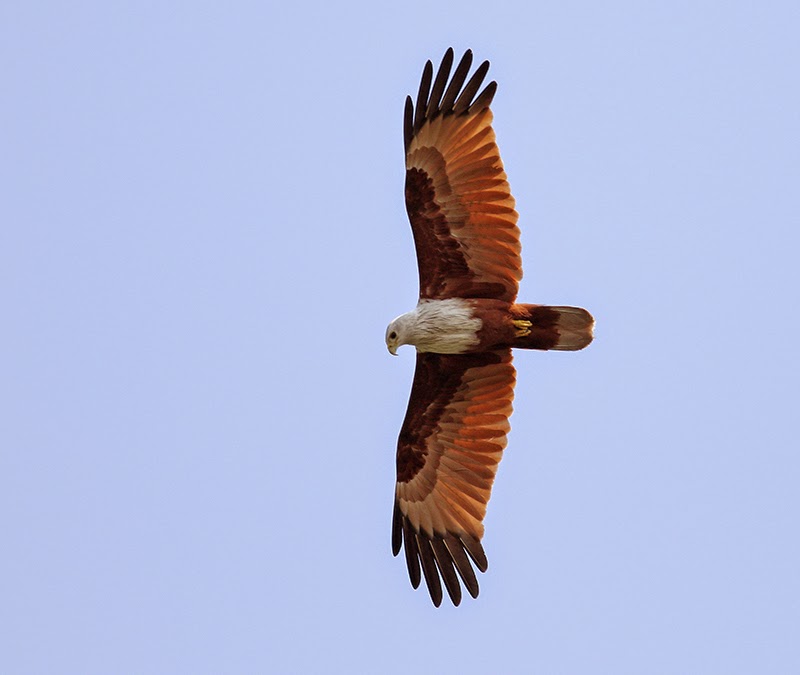 We then drove back towards Habarana Tank and went to the far end of the dam. Lots of whiskered terns, a family (including nest) of white bellied fish eagles, a very distant grey-headed fish eagle, various herons and a Baya weaver weaving it's nest:

At the end of the dam we got out of the 4WD and wandered off into some trees/scrub behind the dam where we found a black-headed cuckooshrike. This stayed resolutely obscured in the tree top and although I saw the bird well it was seen  small bits at a time - the tail here, the white belly there, then finally the head. As you can imagine getting a picture of any kind wasn't easy but eventually I got a very poor record shot.


Moving on we found a small group of white rumped munias then a pair of chestnut headed bee-eaters - the only ones we saw.


The bee-eaters finally disappeared to be replaced by a crested hawk eagle flying towards us. I lost the eagle behind some trees but it had landed on a electricity pylon - a little distant but great to see. 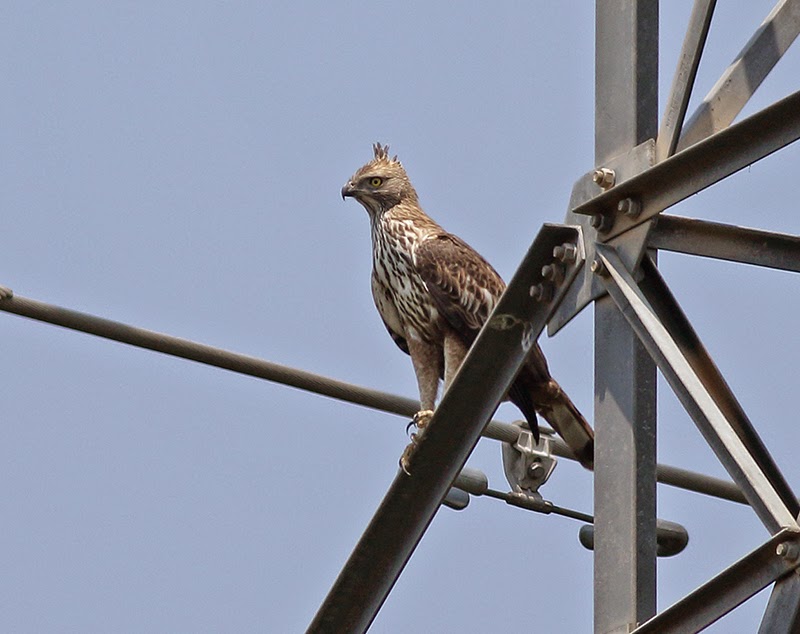 After 10 minutes or so the eagle decided it was time to move on and took to the air ....and circled over our heads several times before drifting off.....superb!


By now it was getting really hot so we called it a day and returned to the hotel where we were soon established by the pool beer in hand.

Now whilst at the pool I always had the camera and bins handy because you never know what might turn up. The first thing to show was what I think is an oriental honey buzzard:


The only other large raptor with wide bands on their tail is a crested serpent eagle and I'm pretty sure it's not one of those because the rest of the marking on the underside are completely wrong for a serpent eagle.

A hour or so later the resident birds started getting flustered and out of the corner of my eye I got a glimpse of something very large flying down the pond by the pool and it looked as if it had landed. I grabbed the camera and went to the end of the pond searching the trees as I went then I spotted it: 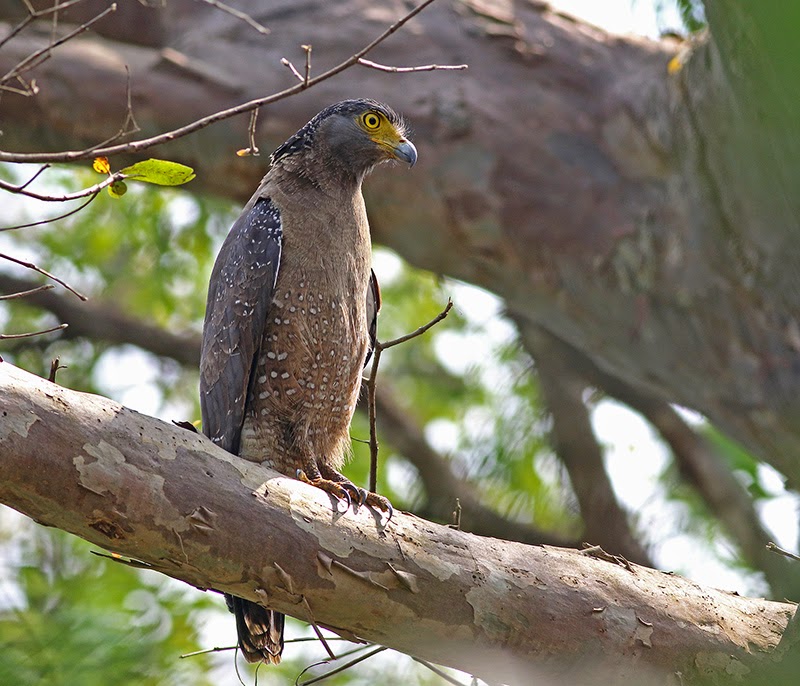 A crested serpent eagle less than 20 yards away. Fortune was for once was on my side. I was partially hidden from the bird by an open bush but I could get a clear view of the bird between its branches. After grabbing a few shots I went and got Pete, Angie and Mary so everyone had a good look and whilst we were all looking it fluffed itself up and raised it's crest !!!

After 10  minutes or so someone came along the path from the other direction and the bird flew off.

Late afternoon I took my normal turn around the gardens getting great views of small minivets, my best views yet of the cuckoo which I'd identified as a grey bellied cuckoo; the other possibility was a lesser but lessers have yellow eye rings. and in the organic farm black headed oriole and in the vegetable patch a superb display by a white-browed fantail.


And finally after looking every day, morning and evening, I got a second look at one of the resident Indian pittas and a rubbish picture! 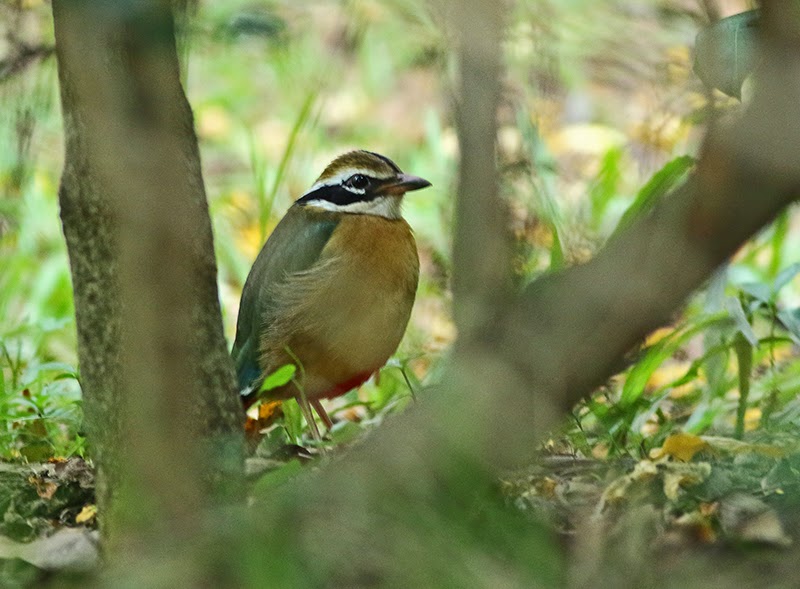 All in all a pretty good day. (More pictures and some of the species mentioned but not shown will appear on my Flickr site. https://www.flickr.com/photos/26135972@N05/)