I know I've only been back from The Gambia a few weeks but  this years "family holiday" was in Sri Lanka (The Gambia being a bird watching tour so not counting as a holiday!). As normal I'd spent a lot of the last year trying to find somewhere suitable for our annual hols  and Sri Lanka seemed to fit the bill, with the Cultural triangle offering decent bird watching and sight seeing.
As a consequence we stayed a week at Cinnamon Lodge, Habarana and then 5 days near the beach about 10 miles north of Negombo at a place called Ging Oya lodge.
The normal routine on family holidays is for me to bird before breakfast then be a bit more touristy for the rest of the day with perhaps me having another wander around during the last hour or so of daylight.

The flights and hotels were booked directly with the operators using Sri Lanka airways because they fly non-stop to Bandaranaike Airport, Negombo.
For ground transport I was lucky enough to come across Habarana Travel (http://www.habaranatours.com/) - a very small, independent group who operate out of Habarana with Rukmal (owner, main guide, organiser, sommelier, you name it he does it) doing a fantastic job organising our transfers from the airport to Habarana and from Habarana to Ging Oya as well as organising our sight seeing outings whilst in Habarana where he also acted guide for most of our trips. And if that wasn't enough he had an evening job at Cinnamon Lodge as a sommelier!!!!

Since it was a family holiday do not expect to read about how successful I was ticking off all the Sri lankan endemics - because I wasn't. I will however tell you about the birds I managed to see and photograph on a wonderfully relaxed family holiday and as a special treat I'll show you some shots of the sights we visited.
We arrived in Sri Lanka early afternoon and Rukmal was in the Arrivals Hall to meet and greet us and ride with us (there were 4 of us Angie and myself plus 2 friends - Pete and Mary) for the long transfer to Habarana. The transfer should have taken 3-4 hrs but almost all the main roads in Sri Lanka seem to be undergoing major repairs and delays negotiating these repairs were long and frequent. Sri lankan traffic behaviour doesn't help because each time you slow down or stop every motor bike and tuktuk in the country seems to come up the inside, up the outside, up the pavement, whatever, but the result is the bikes and tuktuks (most of which seem to have a top speed of around 20 mph) are now in front of you and even when the lights go green your speed is restricted to their top speed until you manage to overtake only for a repeat performance 2 miles further along as you stop at the next set of road works. At first it was amusing but eventually it wore thin - the transfer took 6 hrs and we'd only gone 150 km or so.

So it was after dark when we arrived but Cinnamon Lodge looked fantastic.

A quick shower, change of cloths and we were enjoying gin and tonics then an excellent dinner.

Next morning I was up at daylight to explore the gardens which extend (according to Cinnamon Lodge ) to over 17 acres and contains 1700 trees. As I left the room I heard a bird calling and eventually found the source - a brown-headed barbet....nice start. I'd only gone about 100 yards when I came to the gates of the hotels small organic farm. There was a security guard on the gate but he said it was all right for me to enter (actually I have no idea why he's there because the only people who can get there are hotel workers and hotel guests and no one is denied entrance). I went in and was approached by one of the ground staff who's job seemed to be to show people around the farm and he proceeded to show me the various species that nest in the farm - Sri Lanka woodshrike, black hooded oriole, Jerdons leafbird, white-browed bulbul all of which nest only a few feet from the ground and most of which seemed totally un-phased by the attention they got from passing farm workers and people like me. Though to be truthful I thought too many people got too close (workers and guests) to the birds. I maintained a discrete distance (had to because my camera has a 3.5-4 m minimum focus length so it's pointless getting too close) though many being shown around went within inches especially of the bulbul. Why do people have zooms on their cameras but still insist on putting the camera 6 inches from a birds face?


It was whilst looking at the white-browed bulbul I noticed a bird on the wires 20 yards away. My guide suggested it was a woodshrike but it clearly wasn't so I moved to get the light from a better angle (luckily it was in the sun because the rest of the area was almost pitch black). It was a brown shrike and I think it was the less common (in Sri Lanka) Lanius cristatus lucionensis.


Also in the garden were magpie and Indian robin, yellow-billed babbler, Asian paradise-flycatcher, various sunbirds (3 species) , pigeons (3 species), and I managed a glimpse of an Indian Pitta (which was to be come the bane of my life as, despite looking most mornings, I only saw it once more during our 7 day stay). 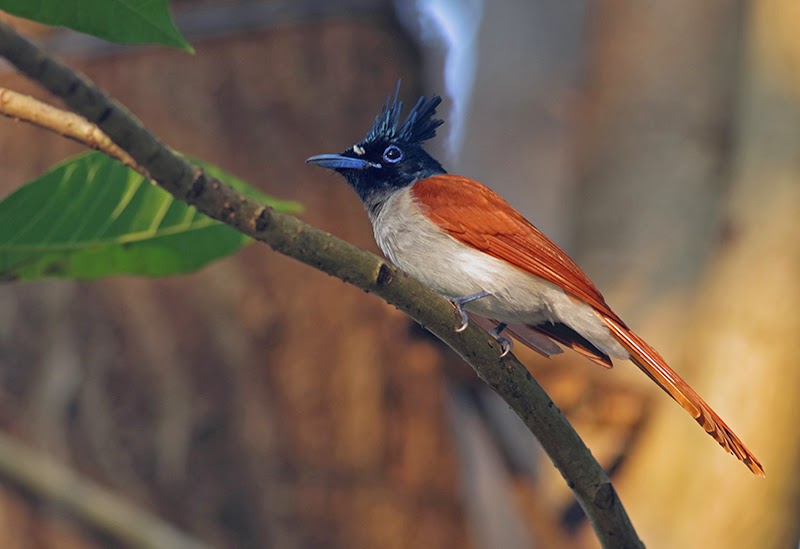 On the way back towards our rooms to meet up with Pete I stopped to look at a small bird flitting around the entrance gate - it was only a male Tickell's blue flycatcher (a bird very high on my wish list) and it was soon joined by the female. All thoughts of Pete disappeared as I tried to get shots of the pair. The light wasn't good but eventually I had a few decent images and went off to find Pete in a somewhat elated mood.

On meeting Pete we spotted a common kingfisher on the pond just outside our rooms, had a quick turn around the farm showing Pete the delights I'd been enjoying, then we wandered off through the main gardens towards the lake.........only the lake wasn't there. (picture)


The dam had been damaged during the recent very heavy rains and was undergoing repair so we had a damp lake bed with streams running through it. There were still a lot of birds around the edges of the streams and pools but it wasn't the lily-fringed paradise I was hoping for.
Out of the lake we could see little, intermediate and great white egrets, indian pond, grey and purple herons, Asian open bill and painted stork and in the distance the occasional brahimy kite and a number of terns which I later found out to be whiskered terns.


As we walked through the trees however things got a bit more interesting in the form of 3 green bee-eaters. Then we found a family group of small minivets plus more magpie and Indian robins, a perched brahminy kite, and a pair of brown faced barbets. By now it was approaching 9.30 and time for breakfast but I had 6 more days to see more and improve on the shots I'd managed.


It had been an excellent pre-breakfast start to our week at Cinnamon lodge.
Posted by Greater Kent Birder at 14:54