Feb 13th.
For our last day in the Gambia we only had till lunchtime so Steve and myself decided to go to the sewage farm then have a look around the scrubby area between the sewage farm and the river.

The sewage farm had the same species as previously discussed so we didn't linger long there and moved into the scrub. Immediately we spotted a group of Senegal parrots which we managed to get quite close to and then it was a case of adopting the stand in a shady place and wait tactics........................and it work great. Most of the birds moving through were the common stuff - sunbirds, finches, babblers but then a grey woodpecker turned up and gave us something more interesting to photograph. 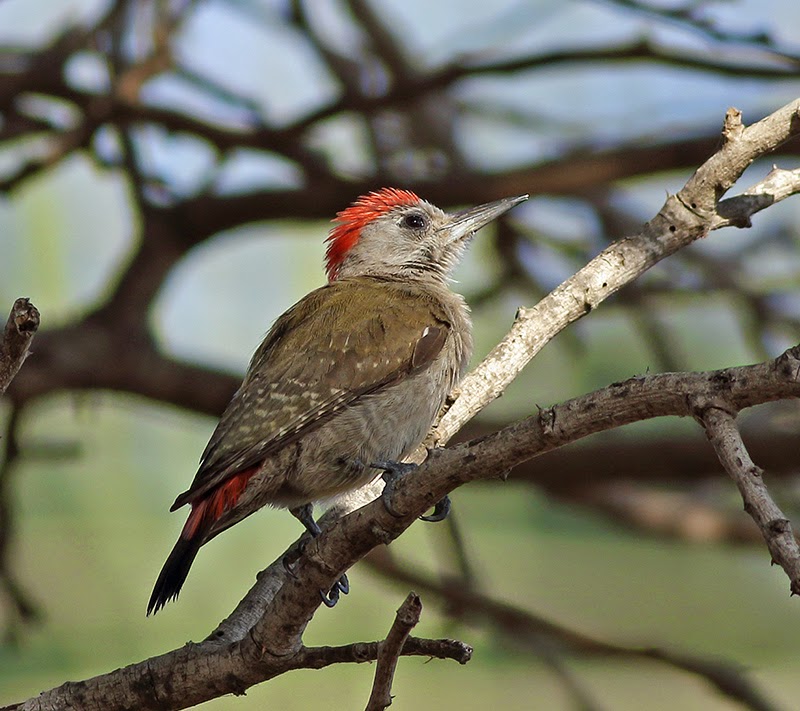 Things moved up a notch when a lesser honeyguide appeared only about 10 yards away ......... 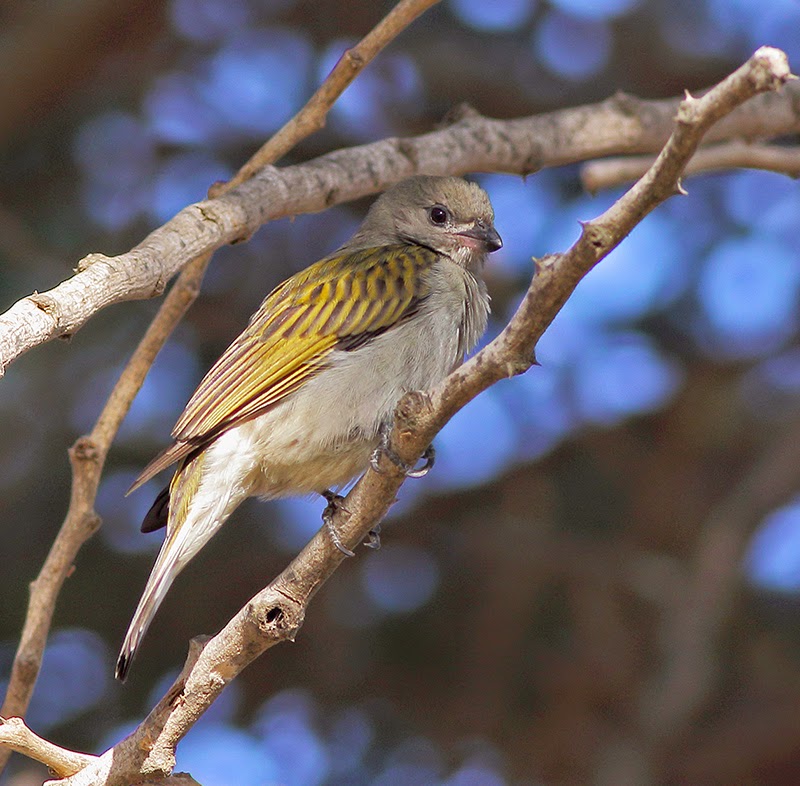 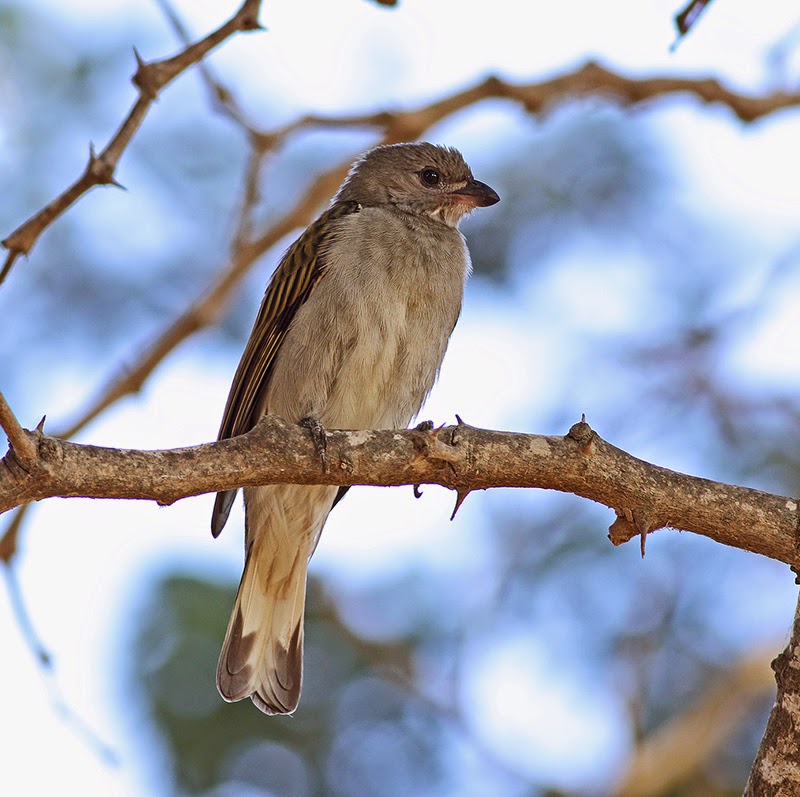 and then we hit the jackpot as a fine-spotted woodpecker landed on a tree probably about 7-8 yards away!!!. 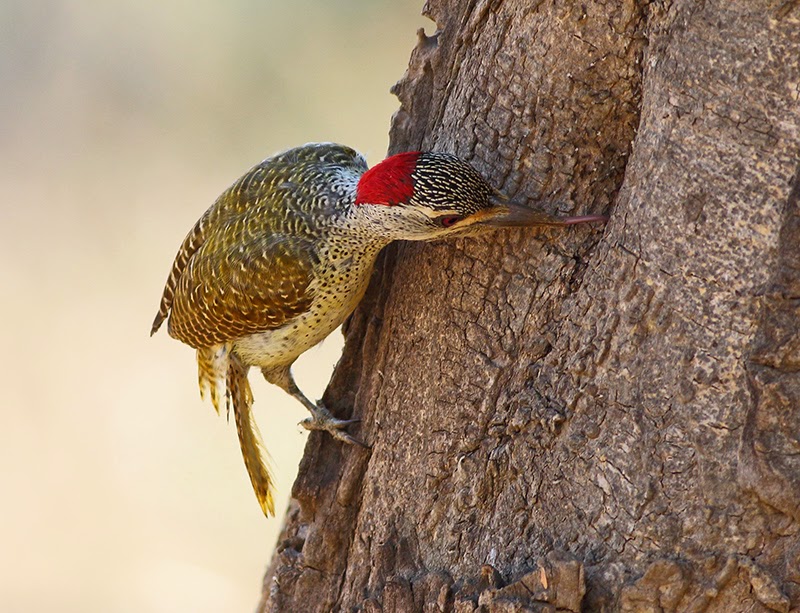 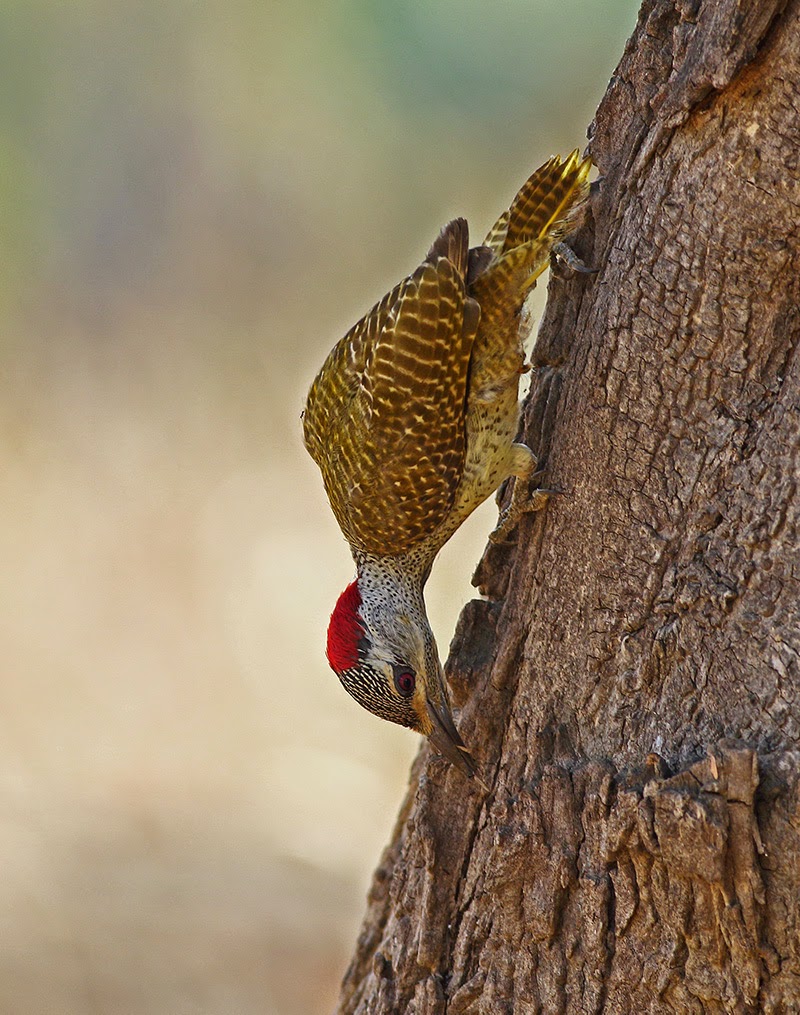 If that wasn't enough the honeyguide decided to have a look around the tree we were sheltering under and was literally only a few yards above our heads - in fact I'm quite amazed the camera could focus on it.However it was almost directly above us so the pictures were a little disappointing: 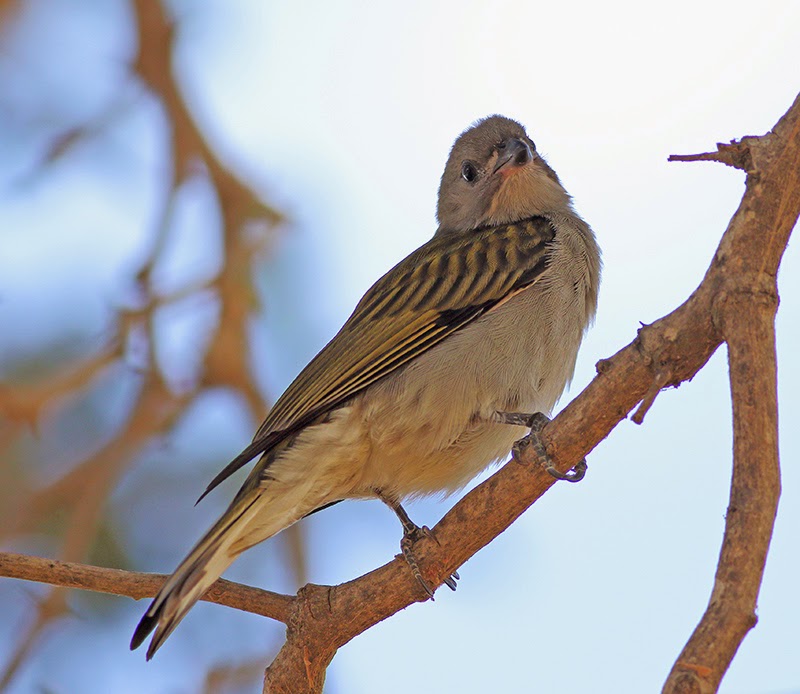 The final scarce-ish bird to turn up was a northern crombec. Here we had good views but it wasn't quite close enough and it wouldn't stay still for long enough to get a decent shot - or if it did it was looking the wrong way. 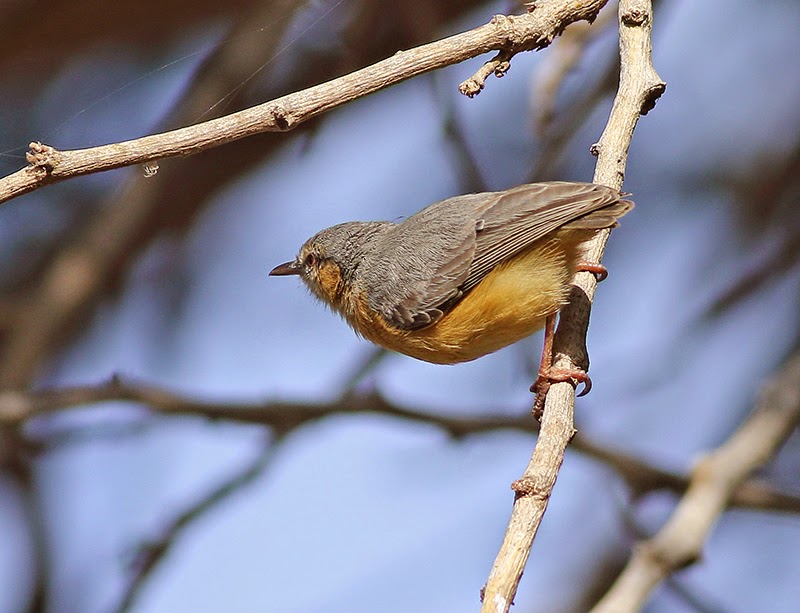 As time was moving on we went back towards the bridge and was playing with the finches and prinias when some people out for a stroll pointed out a bird on the wires  a little way off - it was a juvenile black shouldered kite. I'm sure it couldn't have been there the whole time. Whatever, Steve and myself moved closer trying to get the sun behind us then stopping every few paces to allow the bird to get used to our presence and to grab a few shots. In the end we were so close that to go any closer would result in us being too far underneath it. Anyway we back off and left it there. 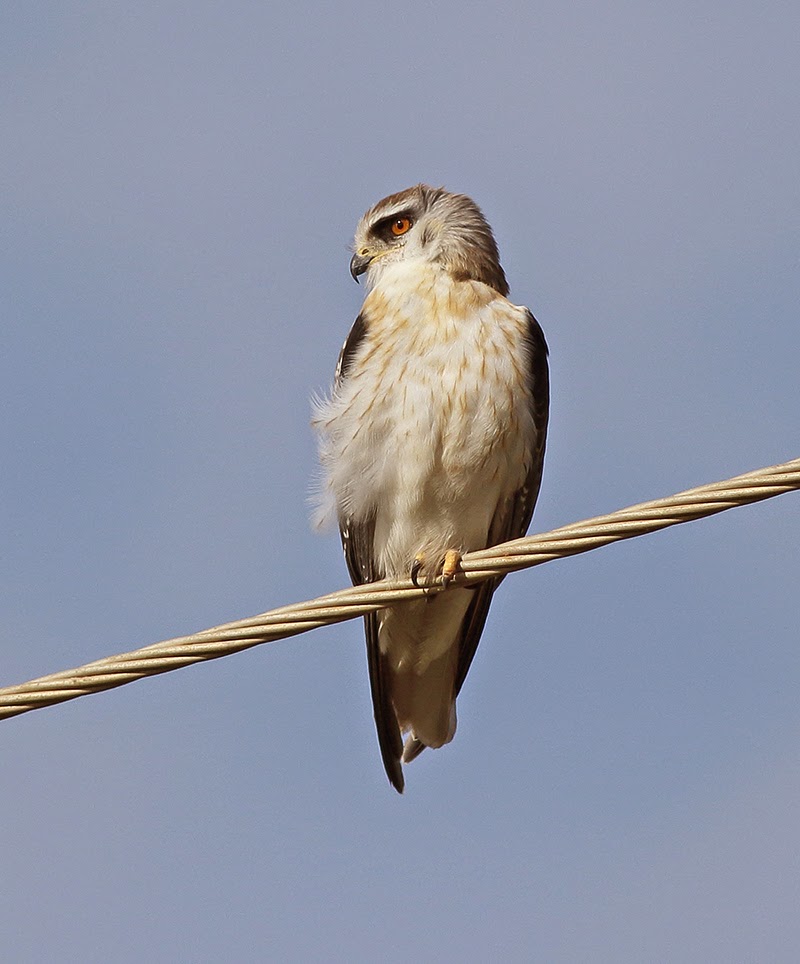 Back at the bridge there was the normal cast but what was new (for the bridge) was a ridiculously tame hammerkop that was so close I had to stand in the road avoiding passing traffic to get it all in frame. 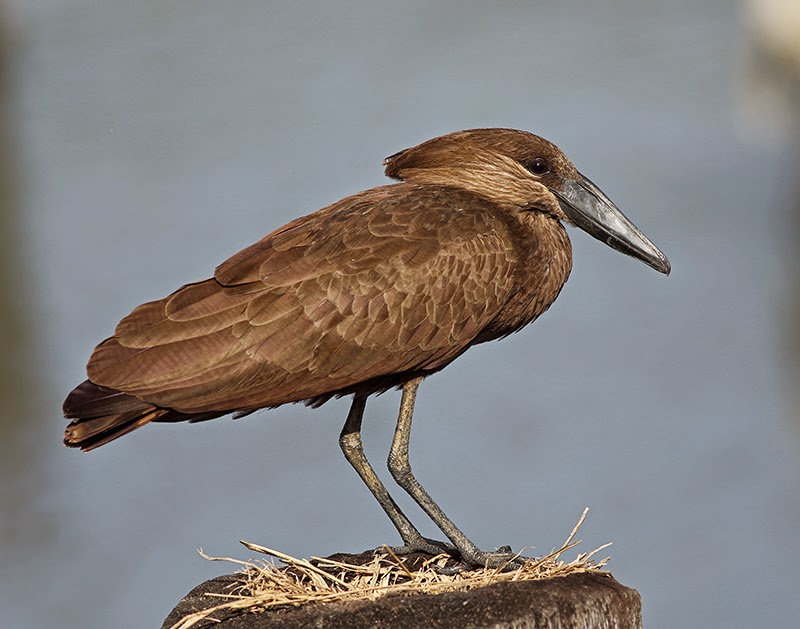 However the thought of the black kite kept playing on my mind so I went back. Fortunately it had changed position so I went through the same routine as before. 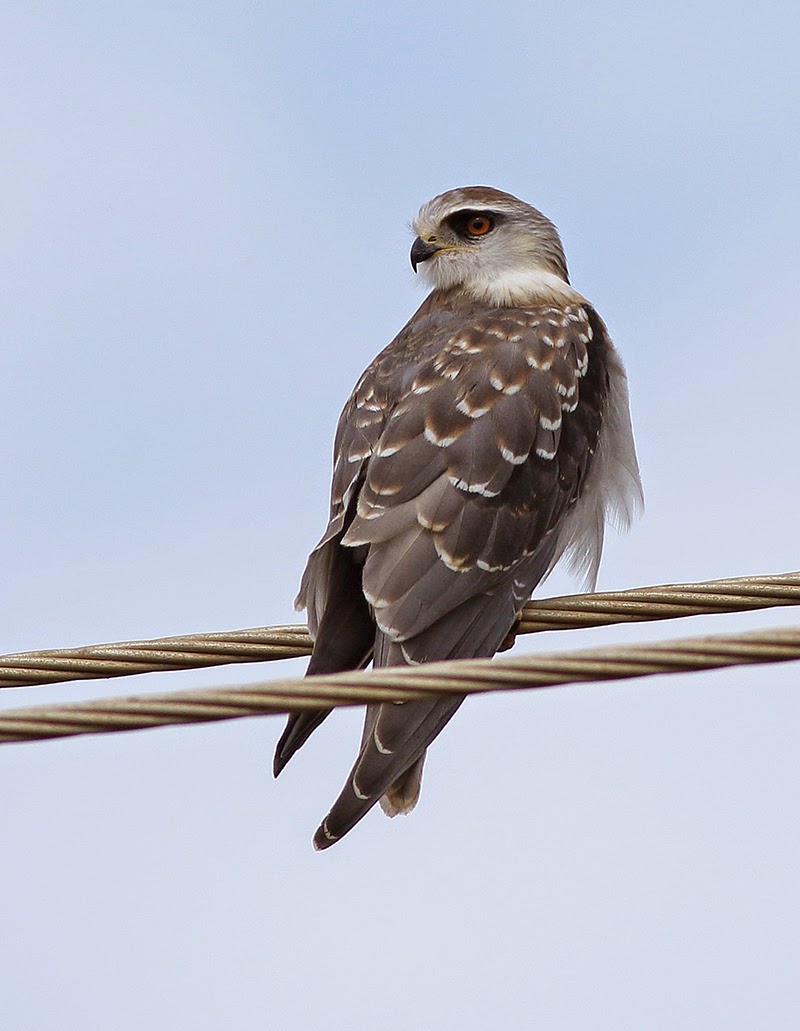 I'd got the shots I wanted when I noticed two others with cameras approaching it from my right - the light couldn't have been good from where they were coming from - but they kept coming until the bird had had enough and took to the air. Luckily I had anticipated this and had the camera off the tripod ready for some BIF shots....magic! 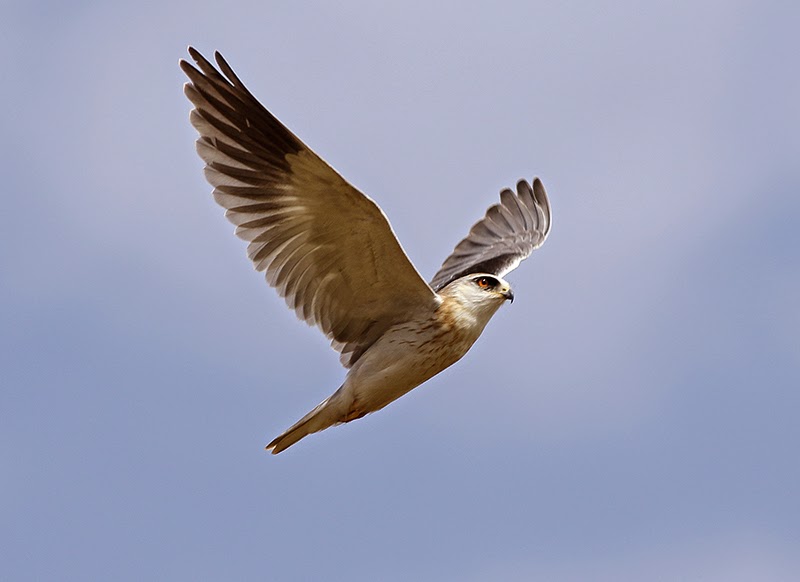 And that was the last shot I took though I did bump into Tom Webzell on the bridge as I was going back to the Bakotu hotel. Coincidence or what?

I'd love to go back to the Gambia though I strongly doubt I ever will. If I did get the chance I'd have to return when the weavers and finches are in breeding plumage.