Birdwatching The Gambia. Day 13. Tendaba then back to Kotu

11th Feb.
The day started with a boat trip across the river and into the mangoes. I had expected lots of herons and kingfishers but it was quite disappointing on both fronts. On the kingfisher side there were obviously pied kingfishers – but you see them anywhere there's a puddle of water – and we saw one blue bellied kingfisher. On the heron front there were lots of western reef egrets and grey herons, fewer gt whites, a lone goliath that we only saw as it flew away from us and out and for me a very  poor view of white backed night heron though I think those at the back of the boat did somewhat better.
What we did see was hoards of darters and great  cormorants though neither proved easy to photograph from a drifting boat. As before the distance, orientation to the bird and light direction are all out of your control so you just have to grab what you can and given how close we got at times a zoom would have been very useful. 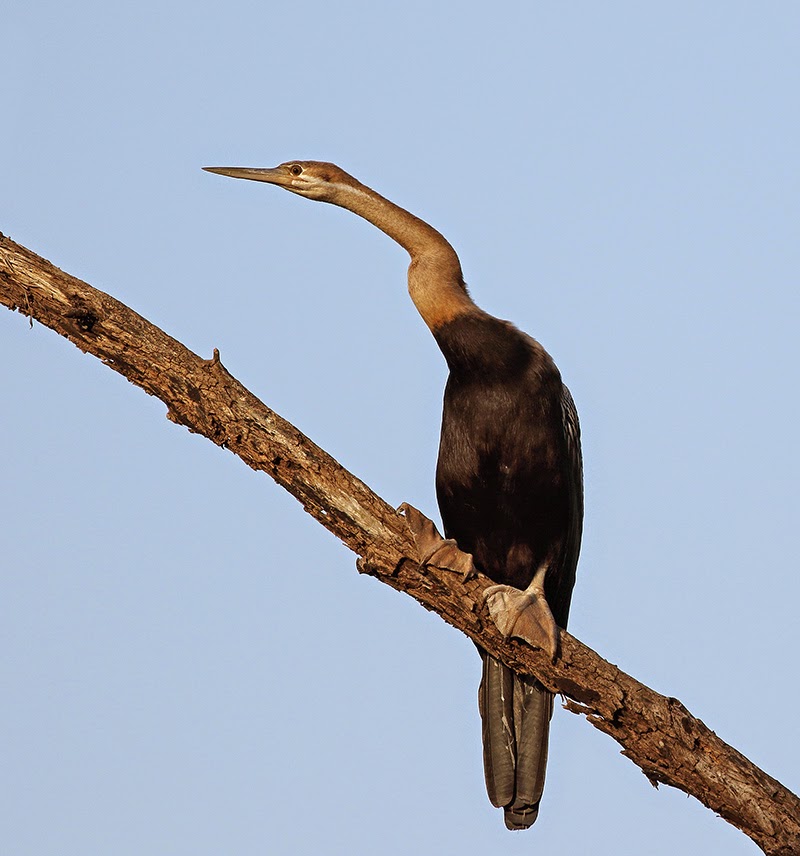 We did stop and get off the boat to search a dry area on one of the islands for bronze winged courser and yet again we dipped. This was a bird I was really beginning to hate; or at least I’d hate one if I saw one. We’d probably spent 5 hrs on 3 separate occasions trying to see this thing and not got a sniff, not even a flight view.
We (well the 2 of us at the front of the boat) did get good, if fleeting views, of a white throated bee-eater and a black stork circled distantly.
Pels fishing owl, finfoot,  and African blue flycatcher were the big 3 for this location and we dipped on all of them.
When we got back to the camp we landed at the village pier rather than the one associated with the camp because the tide was out – remarkable to think the river is tidal that far up. As we landed we were surrounded by little swifts – they were nesting under the jetty. I spent the next 30-40 minutes trying to get BIF shots, some of which I was pretty pleased with. 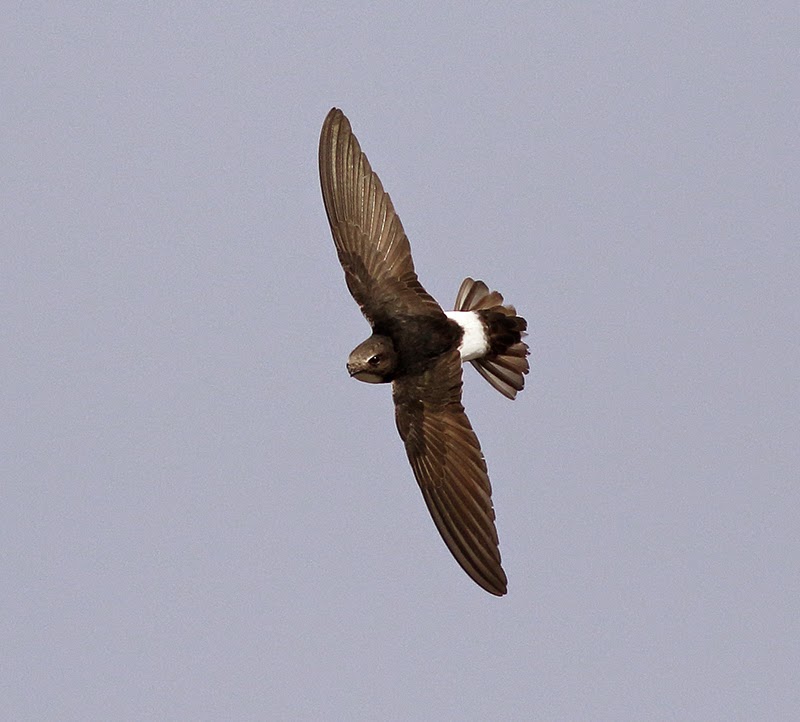 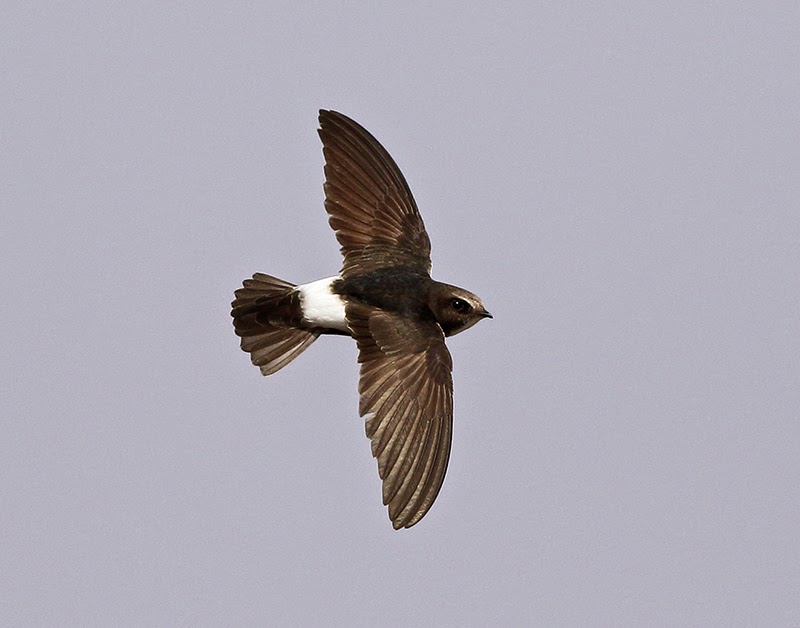 After an early lunch we set off for Kotu stopping at one location because some vultures (Rupells, white backed and hooded) were coming to a dead goat. This was the only time we saw large vultures on the ground and close though the view was obscured by the long grass and scrub; though one did show some consideration when it flew up to a nearby tree.

We also stopped for Tijan to do some shopping – he purchased 2 garden beds (to sleep on in the shade during the heat of the day) made out of wood and what looked akin to raffia. For these he paid 250 Dalasi (less than £4 each ). You could furnish your house quite cheaply out here!.
We stopped again at the wet valley we’d stopped at on the way to Tendaba and again it was excellent for raptors. In total the group saw 18 species of raptor and on this day most of which were seen at this place. I have no idea how many of the 18 I actually saw because I took little notice of the very distant ones. I did spend some time slowly working my way closer to a brown snake eagle sitting atop a tree a 100  yards or so from where the group were standing getting some reasonable shots. Then it took to the air but instead of flying away it circled towards me and slowly spiraled up right over my head giving me a good hard stare for the first few circuits. We had prolonged but distant views of circling long crested eagle and batelur and even longer distance views of tawny eagle plus the more common stuff. 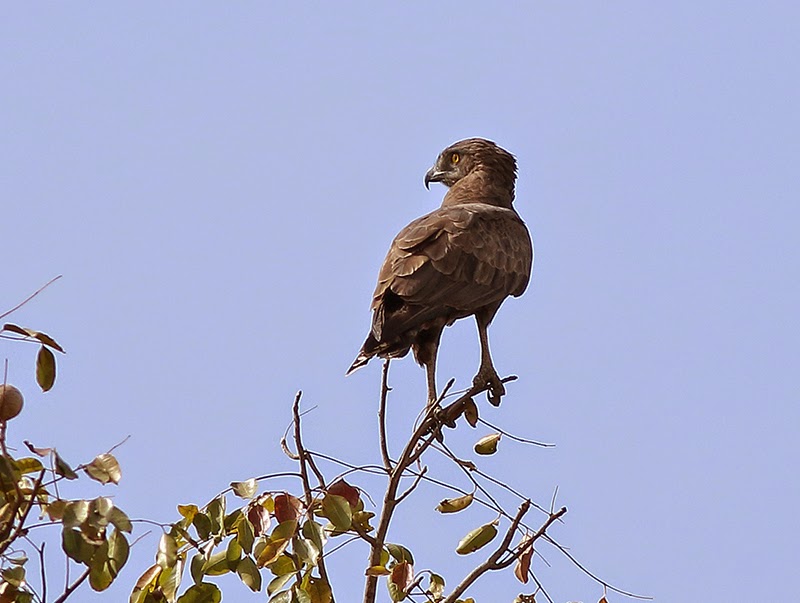 Also at the Wet Valley we saw  a pair of northern puffback, African golden oriole, greater honey guide and stood beside a tree with a calling grey headed bush shrike in it but despite 8 pairs of eyes looking we just could not locate it.


Our expedition up river had come to an end. It had been interesting to see the country away from the coastal strip but we’d been away 5 days and only really been to 2 places that really repaid our efforts – the red throated bee-eater colony and the wet valley for the raptors.  The major set pieces – Basse and the boat trip through the mangoes - were interesting but not very productive.  The main reason I signed up for this trip was so I could go up river, something I’d never be able to do on a family holiday, and to see and photograph Egyptian plover, red-throated and carmine bee-eater. So on that basis we only scored 50% - good pictures of one species, record shots of a second and a total dip on the third. We did see several species that hadn't featured in my thinking  - Temminck's courser, Abyssinian hornbill and a number of raptors - so the jury is still out as to whether it was worthwhile or not.
Posted by Greater Kent Birder at 11:41