Birding the Gambia 2015. Day 9 The trip to Tendaba

7th Feb.
Today the trek "Up River" started. Whilst some birding stops were planned the idea was we would only stop if we saw something really interesting. Well I find rufous-crowned rollers and grey kestrels interesting but we didn’t stop for them! Despite this the raptor count by the time we got to Tendaba stood at 13 species by my count plus 2 or 3 species of vulture.
At one stop we were supposed to be looking at lesser blue-eared glossy starling but if they were there I'm not sure I saw them as everything I photographed was a bronze-tailed.
One of our main stops en-route was at a shallow valley flanked by trees where the fields were still damp and on the other side of the road there was a small pool. As we alighted  Tijan immediately found a western banded snake eagle. We had "seen" one several days earlier but I for one hadn’t counted it as the views were so poor as to be almost non-existent. This time there was no mistaking it especially as I took about 100 shots as I worked my way closer. I only stopped because I was virtually underneath it. 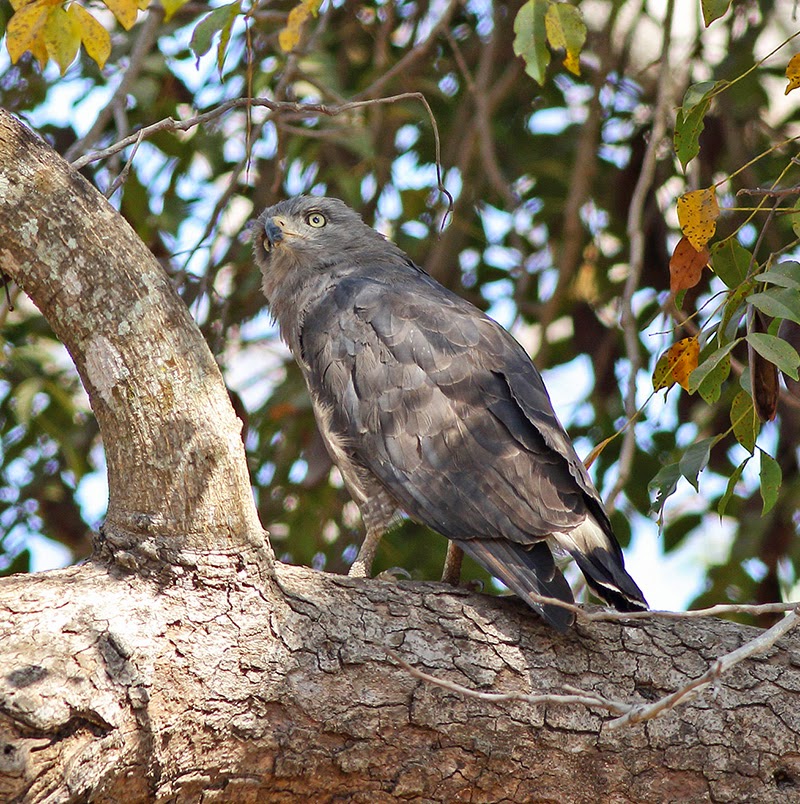 Back on the other side of the road, at the pool, those fed up with the eagle had found a distant malachite kingfisher then it was into the boggy fields.
This was mainly a raptor place with harrier hark, a very distant tawny eagle, another western banded snake eagle and a long crested eagle. In a distant tree there was a palm nut vulture and during our walk along the valley I spotted a violet turaco that immediately disappeared. 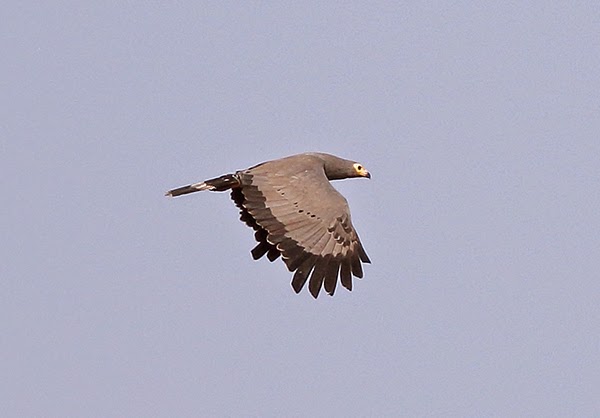 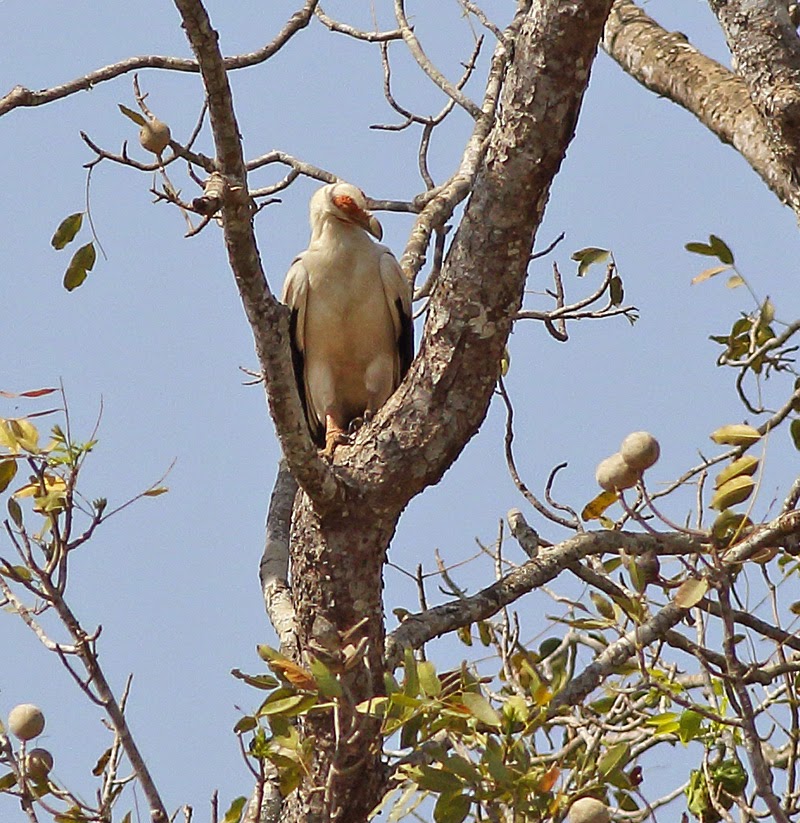 On the ground I had poor views of a plain backed pipit and in the air we had  mosque and rufous-chested swallow plus blue cheeked and European bee-eater. As happened throughout the trip the swallows disappeared immediately and the shots I managed are only of use in confirming the id. 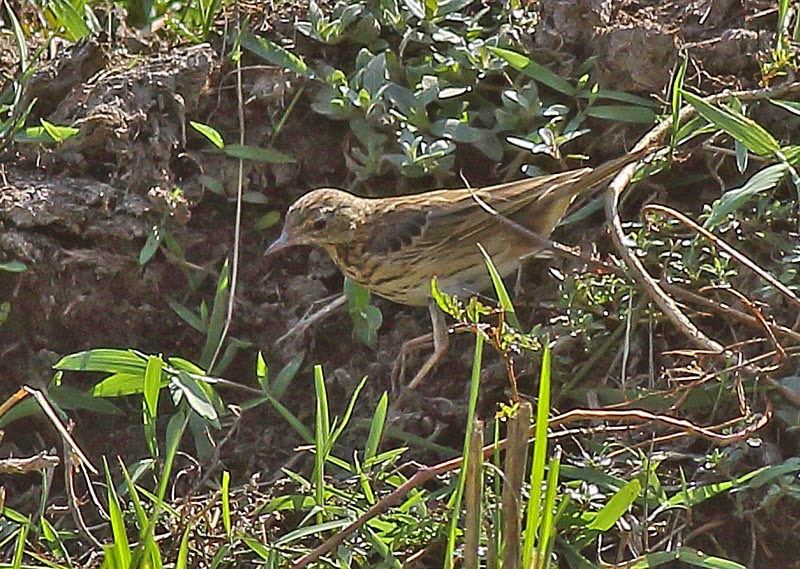 Lunch was at a bridge - which from Google maps I assume was at Kalagi. For me it was the now traditional picnic chair plus a beer in a shady place. Bird-wise the stop was a bit of disappointment with little to see other than a distant flock of wire-tailed swallows who appeared to be nesting under the bridge, a greenshank and western reef egret both of which wandered past along the river bank. A northern grey headed sparrow and pied kingfisher both of which spent a little time in a nearby tree.

As we were about to leave Tijan took us to a tree close to where the coach was parked which turned out to be full of glossy starlings and here we certainly did see a new one - the splendid glossy starling. I wish I'd had known earlier as I would have spent most of the lunch stop at this tree. 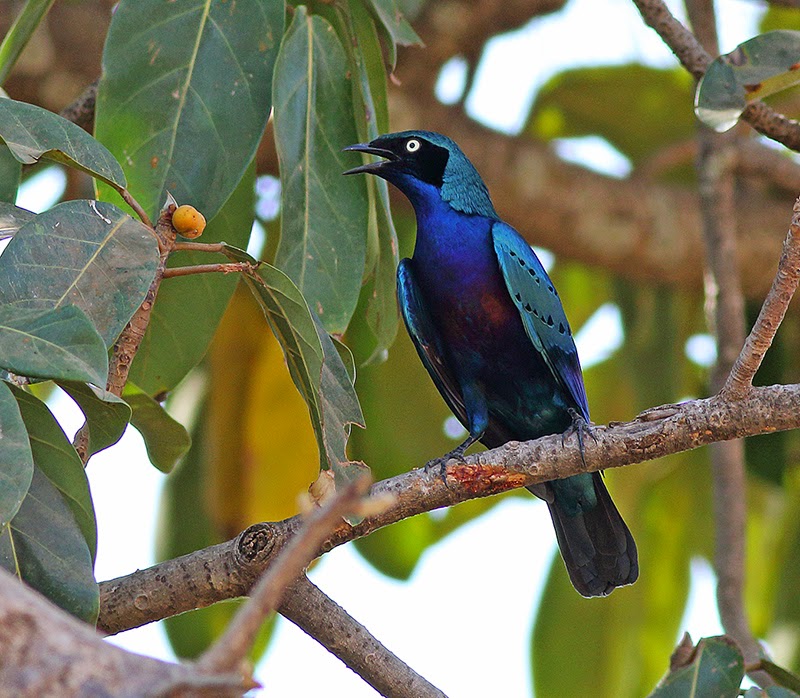 Actually this is a major feature of all Gambian bird guides - they don't tell you what they hope to find until they find it.
The other stop was at Kiang West National Park. It was really hot here (37C) and we quickly started to wilt as we wandered across the parched fields though a brown snake eagle lifted the spirits for 30 seconds. In the end Tijan went looking for the birds whilst we wimped out in the shade of some trees waiting for him to call us over. This way we got to see  Abyssinian hornbill, Temminck's courser and chestnut-backed sparrow lark. 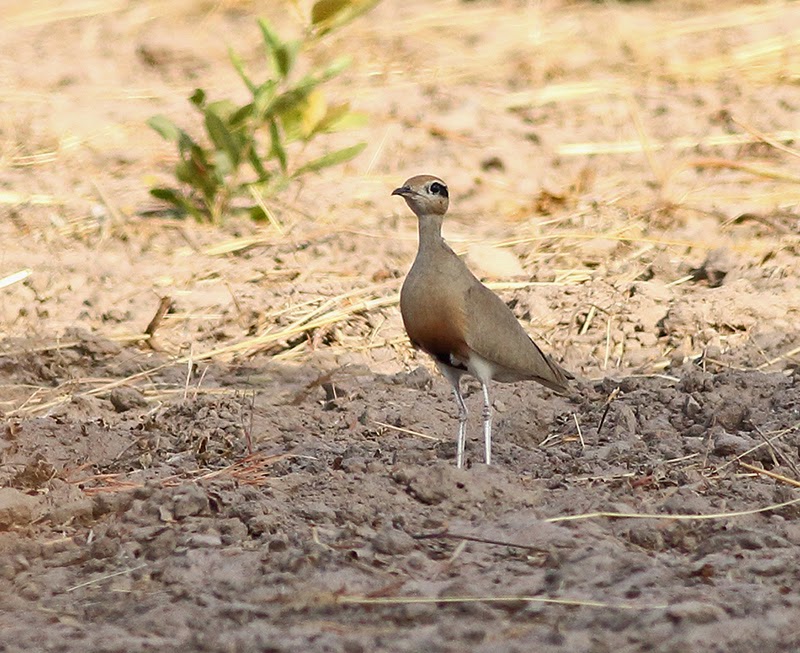 We did however manage to find a pigmy sunbird all on our own……well it found us really - it flew into the tree we were sheltering under. These are quite common inland and are absolutely stunning - certainly worthy of a lot more attention than we had time for.

After arrival at Tendaba we went straight out and scoured scrub for bronze winged courser but didn’t find it. There were a number of birds that I could have spent time with if on my own but the group was after bronze winged courser so we searched and searched and searched in vain. One bird the others saw was white-rumped seed eaters but I couldn’t get on them either. I’m not sure whether I was too short to see over the grass/scrub, their directions were rubbish or I was just losing the will to live after a couple of hours of searching for the courser in 35C heat. What we did find was a striped kingfisher and a Vieillot's barbet so it wasn't a total waste of time.

Thankfully the courser search came to an end, we went back to the (very basic) accommodation and I had five minutes under a dribble of water ( not enough pressure to call it a shower), then it was time for something to eat and more importantly drink. My cunning plan for Up River was only to eat stuff if it was hot – so I had some sort of stew with chips (my Up River staple). Some of the others had salad with their meal and regretted it. As always the beer was the highlight though.

Posted by Greater Kent Birder at 17:23