Today was not a good day.
The birds we saw were pretty hard to find and once found even harder to see. Added to that I missed out on what was possibly the shot of the holiday.
We went to Bonto Forest to see owls plus a few other species. The first owl we stopped for was a white faced scops owl. I was alongside the local ranger who was showing us where the owls roosted so I was first in line. I stepped under the trees and there 15-20 feet above me was a white faced scops owl completely in the open. It was stunning. After a few seconds I stepped back to let the others see it without taking any pictures being fearful that the noise of the camera might scare it off. The others went in a few at a time but slowly but surely the noise level increased (both talking and camera noise), with the last group getting very noisy as one of them, unbelievably,  couldn't see it. Needless to say by the time everyone had finished looking and photographing it and I got a chance to go back in the bird had got fed up with the disturbance and hidden. I think I was the only one to not get a shot. I went ballistic. I don't think I have ever seen such poor behaviour in close proximity to a bird and I made my thoughts known.
This unfortunate incident cast a deep shadow not only over the rest of the day but to a certain extent the whole trip. I was already coming to the opinion that birding in large groups was not conducive to getting decent pictures – either because too many (myself included) were trying to get the same shots but also because I could't spend the time I’d like to with some of the species we found as there was always a desire to move on and find something else – something I had been worried about since signing up for the trip. I can have a great time with photogenic common birds on a trip like these these are simply noted and we moved on.
Anyway the rest of the day was a bit of an ordeal – my heart wasn't in it. A few comments were made along the lines "you can't expect to get everything - that's just part of birding". This actually made matters worse because it was the (totally avoidable) cause of the missing out which was the problem, not the missing out per se.

What we did see was a Vereauxs eagle owl and a brown wood owl – the latter being regarded as a good bird to get. We also saw a few other species – green crombec being one (I think) and somewhere along the way we found a harrier hawk but as I said I wasn't really paying that much attention. We also sat around for a while hoping for a white spotted flufftail to show but it didn't. 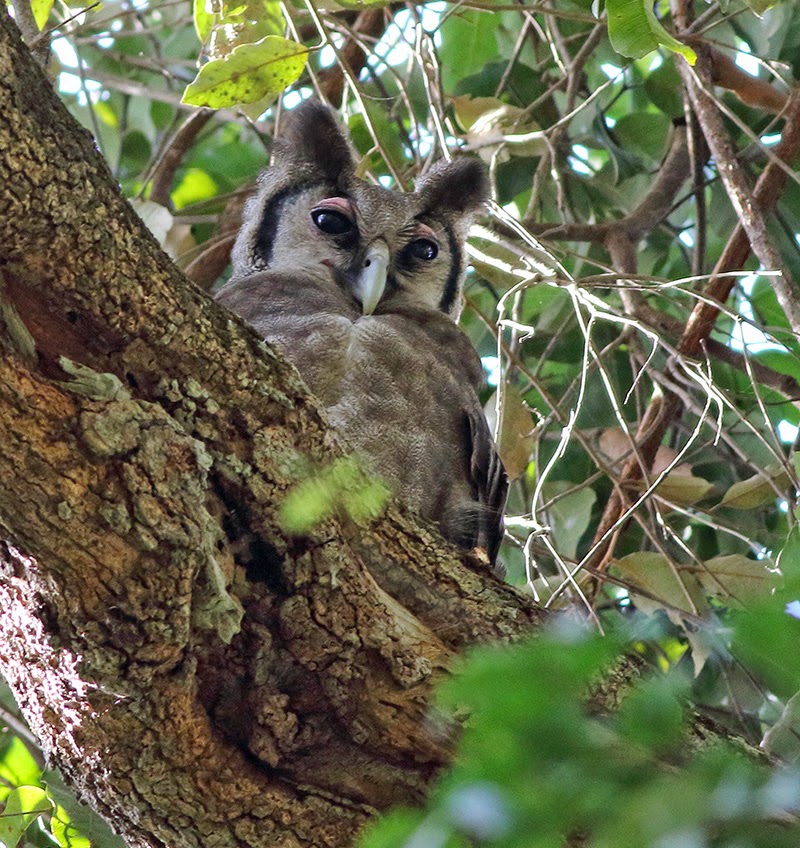 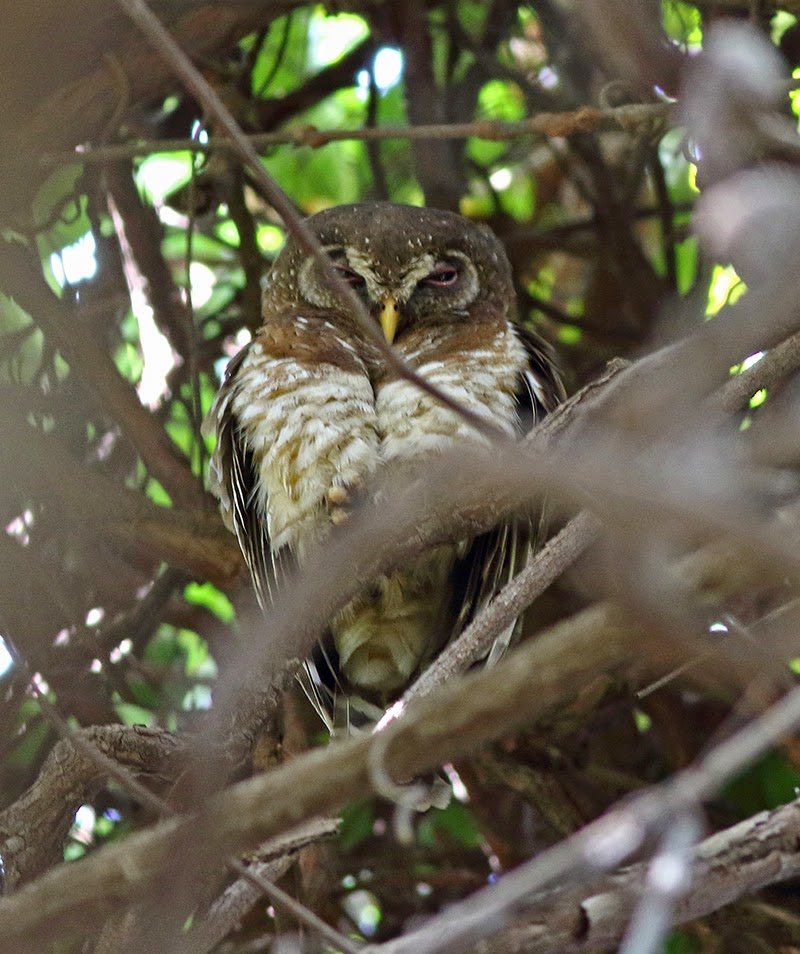 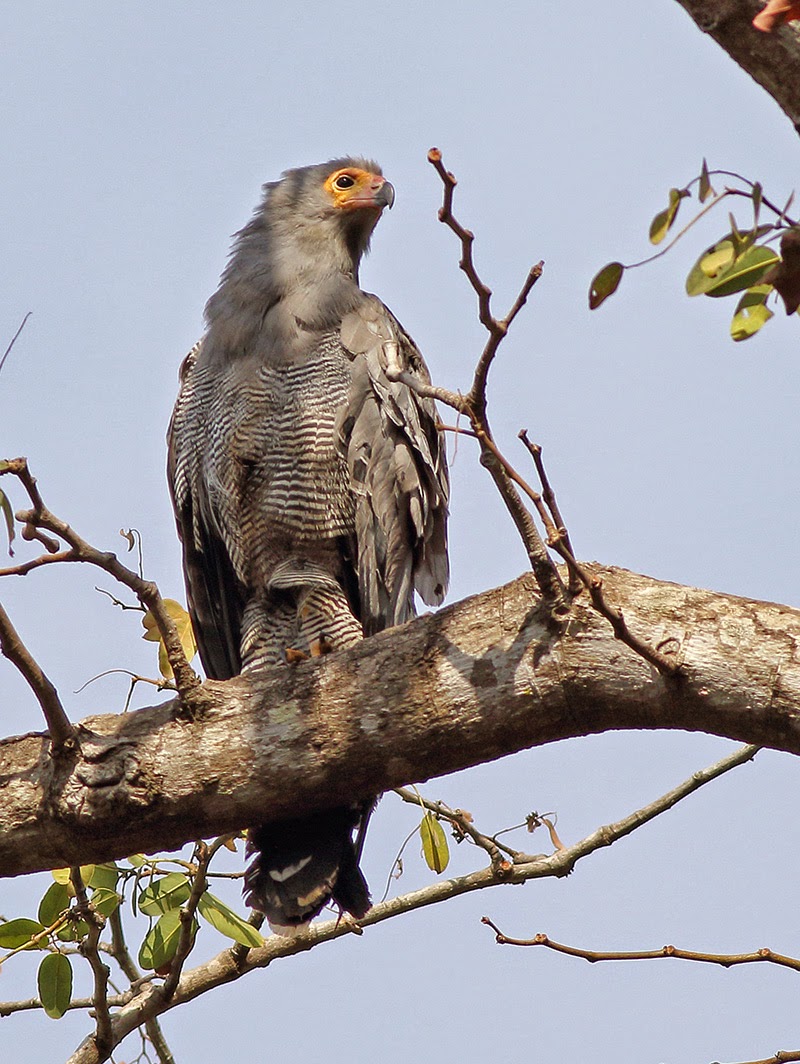 Lunch was a picnic at the forest rangers shelter where a few things were coming to the water bowls – in particular black-rumped waxbills and a stunning red-bellied paradise flycatcher with a very long tail. So long in fact that for most of the shots I was too close to get all the tail in. The only drawback being it was so dark most of the pictures were of very poor quality – most too poor to even be called “record shots”. 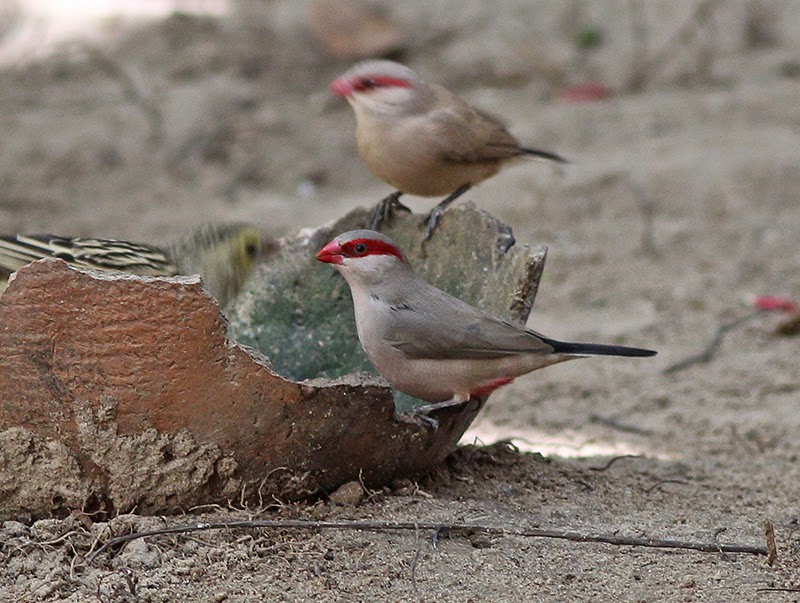 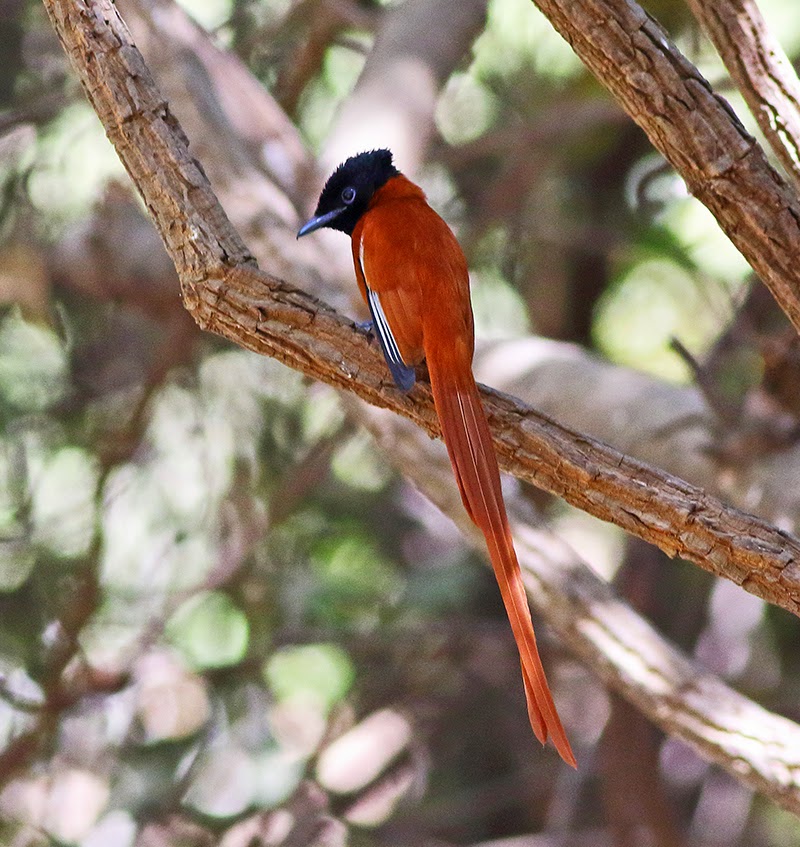 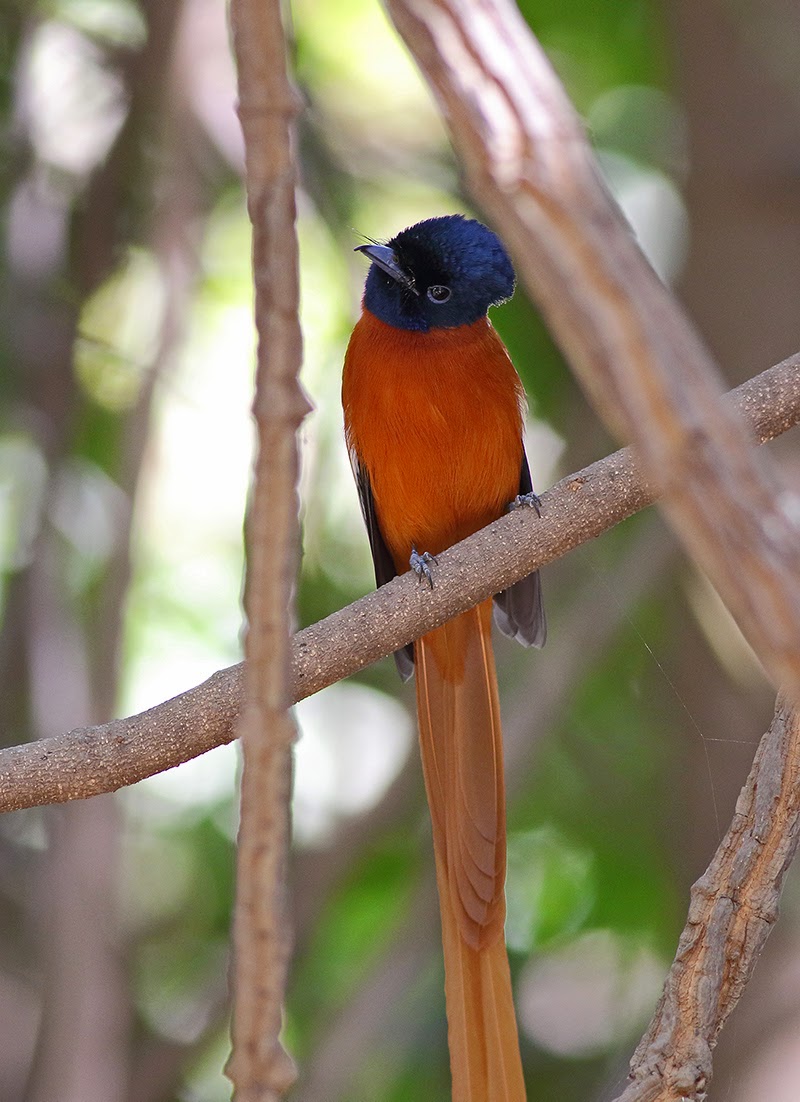 Whilst everyone else was eating lunch I went back to the scops owl roost twice to see if it was showing but it wasn’t, all I could see was a few tail feathers.
After lunch we moved on to Farrasutu to see greyish eagle owl but this was at quite some distance; the local guide not wanting us to get closer for fear of spooking it (a reaction from earlier perhaps). I’ve since seen shots from another birder who went to see it and he must have been taken a lot closer than we were to get the shots he did. 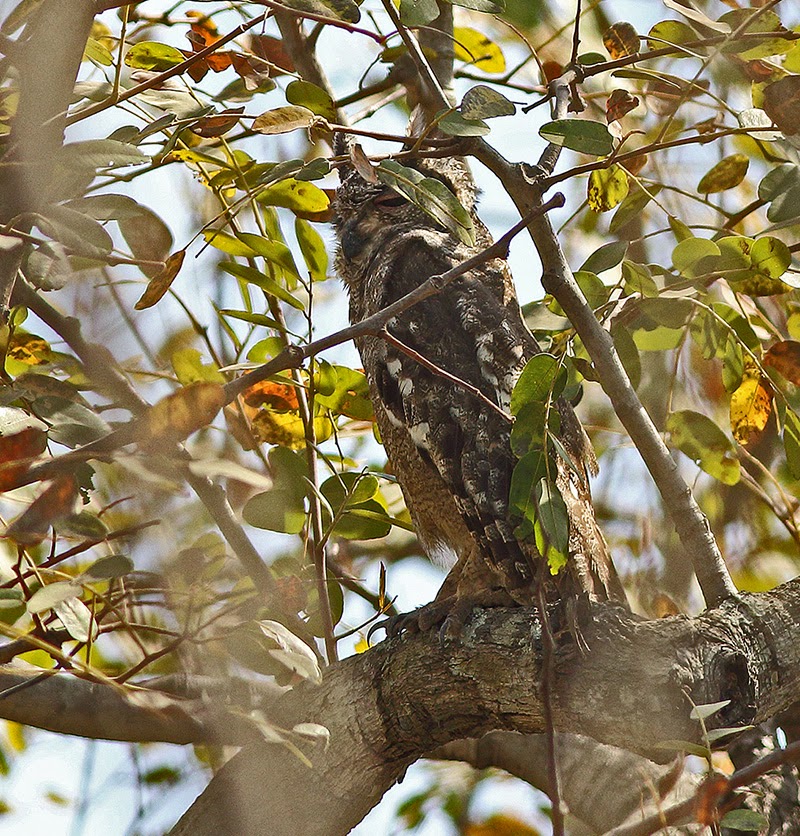 When some pictures of this owl were first posted on-line a few people suggested it was a Verreaux’s eagle owl since it had pink edges to its eyelids but it is a greyish. If you Google greyish eagle owl you will see it has pink edges to its eyelids (as indeed does the brown wood owl - see picture above) whereas the entire eye lid of a Verreaux’s is pink (as can be seen in the Verreaux's shot with this post).
The final destination was an area of woodland with some ponds where we saw the rather scarce white-backed night heron. 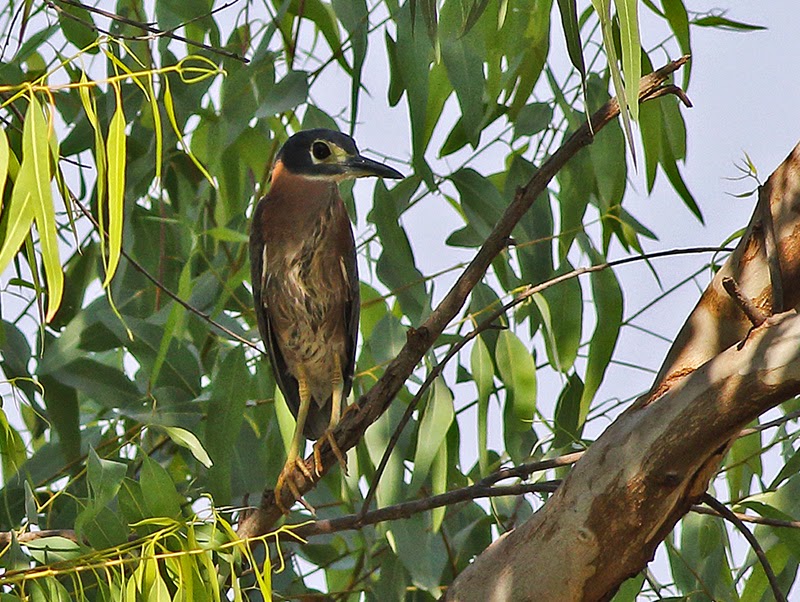 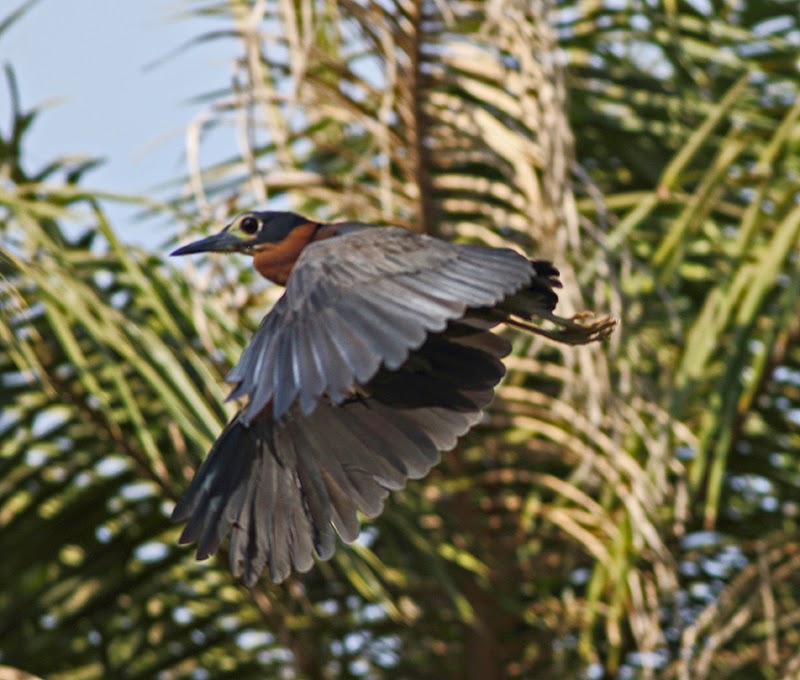 Posted by Greater Kent Birder at 10:02