Tuesday 3rd Feb.
Tujereng, then Bato Kunku
After the photo-fests of the last few days today I came down to earth with a very strong bump today. It was hard work. We did see a number of new birds but the views were for the most part distant or even worse so fleeting that it's difficult to say what I really saw - the views were certainly not good enough to recognise the birds should I see them again.
Tujereng consists of an area of low scrub near the sea and the morning session was predominantly about wandering around looking for stuff rather than finding a good spot and waiting , camera at the ready, for them to find us – as a consequence photo-opportunities were limited and in general only record shots were obtained.
Ospreys were seen quite often but normally only very distant and blue-cheeked bee-eaters were seen flying though again always distant. 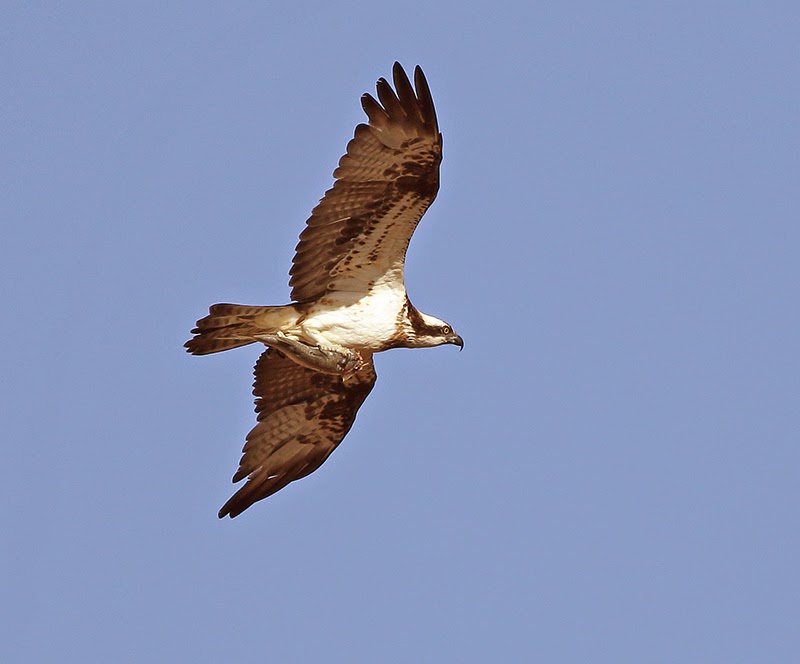 Sunbirds did pop up close by but with the group constantly on the move there was no time to wait for them to come out into the open.
The first new bird was a Senegal batis. This is a very small bird and I don't think we got closer than around 50 yards but, every the optimist, I fired off a few shots one of which you can enjoy here though you'll probably need a magnifying glass:

Next up was a chestnut-crowned sparrow weaver where I did manage to get closer but this time the bird was partially obscured.


A little further on Tijan picked out a striped kingfisher. We were a lot closer to this but we were now looking straight into the light - there's always something wrong - but overall, given the conditions, I was quite pleased with the results.

We then went looking for a black-bellied bustard in an area of quite open low scrub. We failed to find the bustard though I managed to get onto a rather tatty looking whinchat flushed by the others:

Now if things had been difficult photographically up to then they were about to deteriorate significantly.
We had found a small party of senegal eremomela (3 or 4)  but I just couldn't get the camera to focus accurately and despite taking loads of shots they were all pretty rubbish.  I don't know whether it was me or the conditions. What I can say is it had been hot during our stroll and the camera felt  hot to the touch. The light was also very harsh (the old 7D didn't like harsh light conditions). For the rest of the trip I tried to keep the camera out of direct sunlight by use of a rain guard that can cover both lens and camera.

Things didn't improve when we went into a compound /small holding where a pair of tchagra were lurking. Again despite the bird being larger and closer than the eremomelas the camera still wouldn’t lock on properly and same for some pied-winged swallow.

During this whole frustrating period the only bird I managed to get a half reasonable shot of was a northern puffback..

The final frustration of the morning came in the form of a red-winged warbler which despite help from several people I just couldn't get on to - it was on the ground behind some scrub so perhaps my short legs were the problem and I wasn't getting the views the others got. Whatever the reason after 15 minutes or so I gave up.

On the way to lunch we stopped somewhere, I think to see an owl, and whilst we dipped on the owl we did see a mottled spinetail - this I actually saw quite well despite it going past at about 100 miles per hour.
Lunch was again taken at Tanji Bird Reserve where I expected another mega session with the camera. The speed of the service hadn't changed since yesterday but the birding had -  it was very quiet compared to the previous day. As I said earlier this was the hottest day of the trip o date so perhaps the birds were sheltering from the heat as much as we were.. The few highlights of the lunch were in the form of a lizard buzzard coming down to drink, a yellow crowned gonolek, a black-necked weaver in what must be close to breeding plumage and an male indigo bird.


After lunch we went to Bato Kunku which was another area behind the beach and like Tujereng  the birding continued to be difficult though we saw western bonelli’s warbler, had glimpses of  double spurred frankolin, and a western banded snake eagle and later on we had good views of  green pigeon, Vieillot's barbet, a pair of palm-nut vultures as well as a flock of great white pelicans flying over head. Though it must be said the glimpses of the francolin and the eagle were so fleeting I don't count them as a tick - I'm sure that if Tijan hadn't been there no body would have known what they were.

Posted by Greater Kent Birder at 07:44